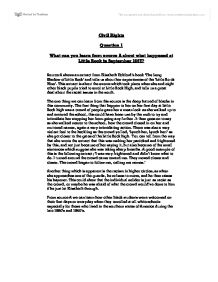 What can you learn from source A about what happened at Little Rock in September 1957?

What can you learn from source A about what happened at Little Rock in September 1957?

Source A shows an extract from Elizabeth Eckford’s book ‘The Long Shadow of Little Rock’ and tells us about her experiences of the ‘Little Rock Nine’. This extract is about the events which took place when she and eight other black pupils tried to enrol at Little Rock High, and tells us a great deal about the racial issues in the south.

The one thing we can learn from this source is the deep hatred of blacks in this community. The first thing that happen to her on her first day at Little Rock high was a crowd of people gave her a mean look as she walked up to and entered the school, this could have been use by the mob to try and intimidate her stopping her from going any further. It then goes on to say as she walked nearer to the school, how the crowd closed in on her and muttered names, again a very intimidating action. There was also a very violent feel to the heckling as the crowd yelled, ‘Lynch her, Lynch her!’ as she got closer to the gates of the Little Rock high. You can tell from the way that she wrote the extract that this was making her panicked and frightened by this, and not just because of her saying it, but also because of the small sentences which suggest she was taking sharp breaths. A good example of this is the following extract; ‘I was very frightened and didn’t know what to do. I turned around the crowd came toward me. They moved closer and closer. The crowd began to follow me, calling me names.’

Another thing which is apparent is the racism in higher circles, as when she approaches one of the guards, he refuses to move, and he then raises his bayonet. This could show that the individual solider is just as racist as the crowd, or maybe he was afraid of what the crowd would’ve done to him if he just let Elizabeth through.

From source A we can learn how other black students were welcomed on their first days or everyday when they enrolled at all white schools especially for those who lived in the southern states of America during the late 1950’s and 1960’s.