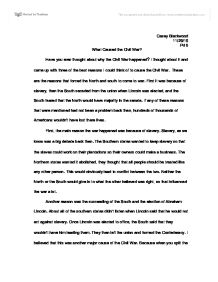 What Caused the US Civil War?

Casey Blackwood 11/29/10 Pd 6 What Caused the Civil War? Have you ever thought about why the Civil War happened? I thought about it and came up with three of the best reasons I could think of to cause the Civil War. These are the reasons that forced the North and south to come to war. First it was because of slavery, then the South seceded from the union when Lincoln was elected, and the South feared that the North would have majority in the senate. If any of these reasons that were mentioned had not been a problem back then, hundreds of thousands of Americans wouldn't have lost there lives. ...read more.

This would obviously lead to conflict between the two. Neither the North or the South would give in to what the other believed was right, so that influenced the war a lot. Another reason was the succeeding of the South and the election of Abraham Lincoln. About all of the southern states didn't listen when Lincoln said that he would not act against slavery. Once Lincoln was elected to office, the South said that they wouldn't have him leading them. They then left the union and formed the Confederacy. I believed that this was another major cause of the Civil War. ...read more.

So to sum it up the union had more states, more people living in their states, and the union was so much bigger than the confederate states. Which would cause a split Government which would not be good at all. Finally, if America was not faced with these problems that were mentioned in the paragraphs above we might not of had a Civil War. We might still be faced with these conflicts still today if Lincoln hadn't been elected. If slavery wasn't around back then that would be one less thing to worry about. If the South hadn't argued about the senate, the northern states might still have the upper hand. If it wasn't for Lincoln the union and confederacy might still be against each other. ...read more.