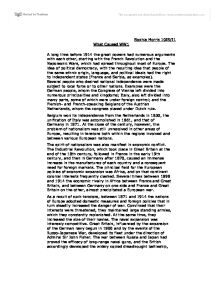 Sophia Morris 10JS/I1 What Caused WW1 A long time before 1914 the great powers had numerous arguments with each other, starting with the French Revolution and the Napoleonic Wars, which had spread throughout most of Europe. The idea of political democracy, with the resulting idea that people of the same ethnic origin, language, and political ideals had the right to independent states (France and Serbia, as examples). Several people who desired national independence were made subject to local force or to other nations. Examples were the German people, whom the Congress of Vienna left divided into numerous principalities and kingdoms; Italy, also left divided into many parts, some of which were under foreign control; and the Flemish- and French-speaking Belgians of the Austrian Netherlands, whom the congress placed under Dutch rule. Belgium won its independence from the Netherlands in 1830, the unification of Italy was accomplished in 1861, and that of Germany in 1871. At the close of the century, however, the problem of nationalism was still unresolved in other areas of Europe, resulting in tensions both within the regions involved and between various European nations. The spirit of nationalism was also manifest in economic conflict. ...read more.

Between 1905 and 1914 several international crises and two local wars occurred, all of which threatened to bring about a general European War. The first crisis occurred over Morocco, where Germany intervened in 1905-1906 to support Moroccan independence against French encroachment. France threatened war against Germany, but the crisis was finally settled by an international conference at Algeciras, Spain, in 1906. The argument between Austria-Hungary and Serbia led to the assassination of Archduke Franz Ferdinand, which made things worse because this added to the tension between Serbia and Austria-Hungary after the crisis that took place in the Balkans in 1908, over the annexation by Austria-Hungary of Bosnia and Herzegovina. Because one form of Pan-Slavism was a Pan-Serbian or Greater Serbia movement in Serbia, which had as one of its objects the achievement by Serbia of the southern part of Bosnia, the Serbs threatened war against Austria. War was avoided only because Serbia could not fight without Russian support and Russia at the time was unprepared for war. Russia really wanted to help Serbia. This again made things worse because it gave Germany more to be bitter about. Due to the alliances Germany must have felt they were being surrounded even more. ...read more.

Unfortunately, this is the main point where Germany, went wrong. They also thought Belgium wouldn't fight back, but to their surprise they did, and this is what slowed Germany down, and was left with no chance in beating the Great Triple Entente. The assassination in Sarajevo, was by the Black Hand group, but this tension between Austria-Hungary and Serbia was nearly at its peak, and as Serbia knew the Group responsible for the attack was nothing to do with them, they laughed at Austria, and thought this gave Austria no reason to start a war. But Austria stood proud and to Serbia's surprise declared war on them on 28th July 1914, this was due to the determination of the war party in Austria-Hungary. This was the first step to war, but definitely wouldn't be the last. Without consulting the rest of the Entente, Russia mobilised their army on the 30th July. And Germany supported it's allie and declared war on Russia on the 1st August, then 2 days later went to war with France. On the 3rd August the Germans launched the stupid Schlieffen Plan and in the month of August 1914 all the members of the alliance systems declared war on each other. Events before 1914 had pushed the Great Powers to war: events after Sarajevo sparked off the war. ...read more.