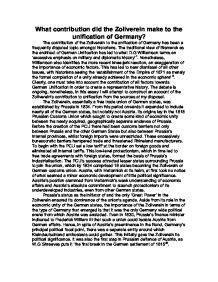 What contribution did the Zollverein make to the unification of Germany?

What contribution did the Zollverein make to the unification of Germany? The contribution of the Zollverein to the unification of Germany has been a frequently disputed topic amongst historians. The traditional view of Bismarck as the architect of German Unification has led to what D.G Williamson terms an 'excessive emphasis on military and diplomatic history' i. Nonetheless, Williamson also identifies the more recent knee-jerk reaction, an exaggeration of the importance of economic factors. This has led to near dismissal of all other issues, with historians seeing the 'establishment of the Empire of 1871 as merely the formal completion of a unity already achieved in the economic sphere' ii. Clearly, one must take into account the contribution of all factors towards German Unification in order to create a representative history. The debate is ongoing, nonetheless, in this essay I will attempt to construct an account of the Zollverein's contribution to unification from the sources at my disposal. The Zollverein, essentially a free trade union of German states, was established by Prussia in 1834. From this period onwards it expanded to include nearly all of the German states, but notably not Austria. Its origins lay in the 1818 Prussian Customs Union which sought to create some kind of economic unity between the newly acquired, geographically separate enclaves of Prussia. Before the creation of the PCU there had been customs barriers not only between Prussia and the other German States but also between Prussia's internal provinces, whilst foreign imports were unrestricted. ...read more.

Therefore, although by joining the Zollverein the German states appeared to be moving towards unification, in fact their leaders felt they were preventing it, or at least hoping for a more acceptable autocratic form. This analysis of events sheds a very different light on the contribution of the Zollverein to German Unification. Nonetheless, if the German princes felt they were moving away from political unification they were certainly moving towards economic unification, which other historians such as W.O Henderson have placed as a principal factor underlying German Unification. The Zollverein appeared to be fulfilling German economist Friedrich List's (1789-1846) prediction that an economic would form the basis of a German national state. Prussia's ascendancy in the union meant, that although any member state could negotiate foreign trade treaties, it was nearly always Prussia who did so. By the 1850s the 'the emergent economic power of entrepreneurs [created by the Zollverein] constrained the freedom of action of German governments'. In essence, the Zollverein came to be force for German unity, which even if opposed by rulers of member states, was supported by their people. Nevertheless, it is important not to overestimate the unifying affect of the Zollverein. German Unification was by no means inevitable, in the same way that 'no one assumes today that the European Union will inevitably lead to a European State'vi. ...read more.

When Bismarck became Prussian first minister in 1862, with the stated aim of German Unification under the Prussian crown Prussia 'had already gone a long way towards gaining economic control over Germany'. Thus, Bismarck's assertion that the years 1815-48 were 'the time when nothing happened' seems unfair. However, the amount of work left for Bismarck to do if he wished to unite Germany must not be underestimated. 'The Zollverein created a common German market rather than fully integrated economy', this statement seems especially true in light of the fact that Hamburg and Bremen only joined the Zollverein in 1888, 17 years after they had become constituents of the 1871 German Empire. The Zollverein also did nothing towards creating a unified German culture or religion, although it did help southern Germany to forget its religious divisions with the north. Fundamentally, the Zollverein gave economic unity to Germany and the initiations of political unity, Prussia the strength to dominate and overcome Austria creating a Kleindeutschland, yet all of this would be irrelevant were it not for the already present German cultural identity and the brilliant diplomacy of Otto von Bismarck. The Zollverein paved the way for German Unification to happen, but it did not make it happen. i D.G Williamson, Bismarck and Germany 1862-1890 ii W.O Henderson, The Zollverein iii W.G Shreeves, Nationmaking in Nineteenth Century Europe iv AJP Taylor, The Course of German History v ibid vi J.Breuilly, The formation of the First German Nation-State 1800-1871 vii Fallesleben viii ibid ix A.Stiles, The Unification of Germany 1815-90 x ibid ...read more.