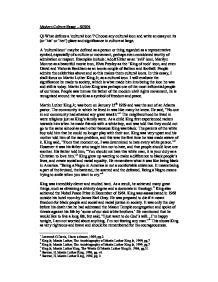 What defines a 'cultural icon'? Choose any cultural icon and write an essay on its (or 'his' or 'her') place and significance in culture at large.

Modern Culture Essay - S0304 Q) What defines a 'cultural icon'? Choose any cultural icon and write an essay on its (or 'his' or 'her') place and significance in culture at large. A 'cultural icon' may be defined as a person or thing regarded as a representative symbol, especially of a culture or movement, perhaps even considered worthy of admiration or respect. Examples include: Adolf Hitler as an 'evil' icon, Marilyn Monroe as a beautiful movie icon, Elvis Presley as the 'King of rock' icon, and even David and Victoria Beckham as an iconic couple of fashion and football. People admire the celebrities above and so this makes them cultural icons. In this essay, I shall focus on Martin Luther King Jr, as a cultural icon. I will evaluate the significance he made to society, which is what made him into being the icon he was and still is today. Martin Luther King was perhaps one of the most influential people of our times. People saw him as the father of the modern civil rights movement, he is recognised around the world as a symbol of freedom and peace. ...read more.

It was only the day before his death that he had addressed the Mason Temple congregation and spoke of threats against his life by 'some of our sick white brothers.' He mentioned that he would like to live a long life, but said, "I just want to do God's will...I'm happy tonight, I am not worried about anything. I'm not fearing any man."6 This shows King as very righteous and brave and should be remembered for his courageousness. Nowadays, black citizens have exactly the same rights as white citizens. If King had not done what he did, perhaps things may have been different today. Even though racism still unfortunately exists, it is less common and not tolerated in most countries and societies. Black people of America and elsewhere are thankful of King's efforts and success. King died as a martyr for black and white people alike. Peace and justice were achieved. King ultimately accomplished his dream. "I have a dream that one day men will rise up and come to see that they are made to live together as brothers...one day every negro in this country, every coloured person in the world, will be judged on the basis of the content of his character, rather than the ...read more.

It is now for us to aid the oppressed and to heal the hate sealed world."11 Therefore, King left it up to us, modern day society to carry on his fight. King was a remarkable human being and gave hope to all situations. People can now fight for what they believe in and know that anything is possible with a little determination. If King can create equality, peace and justice, then shouldn't society be encouraged to fight our own battles to get what we need/deserve? King became a national hero, and this is proved by the National Holiday celebrated every year on January 20th. It is called the 'Martin Luther King day.' On this day, Americans think about racial equality, and the non-violent social change. King changed or influenced the views of many people, including today's people. Also, on this day, people remember his many achievements and Negroes thank him for standing up to the world and achieving integration. King gave them freedom and made racism and prejudice aware to each and every one of us. In addition to the National Holiday, the Lorraine Hotel where King Jr, was shot is now the National Civil Rights museum. Martin Luther King, a man of integrity, intelligence, determination and strength to fight. King was a man who will always be remembered, and will be part of history forever. ...read more.