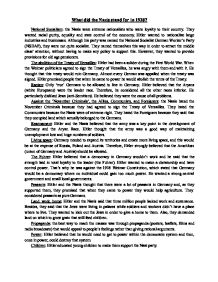 What did the Nazis stand for in 1928? National Socialism: the Nazis were extreme nationalists who were loyalty to their country. They wanted racial purity, equality and state control of the economy. Hitler wanted to nationalize large industries and businesses. Although his party was named the National Socialist German Worker's Party (NSDAP), they were not quite socialist. They named themselves this way in order to attract the middle class' attention, without having to make any policy to support this. However, they wanted to provide provisions for old age pensioners. The abolition of the Treaty of Versailles: Hitler had been a solider during the First World War. When the Weimar politicians agreed to sign the Treaty of Versailles, he was angry with them and with it. ...read more.

Against the 'November Criminals', the Allies, Communists, and Foreigners: the Nazis hated the November Criminals because they had agreed to sign the Treaty of Versailles. They hated the Communists because the Nazis were of extreme right. They hated the Foreigners because they said that they occupied land which actually belonged to the Germans. Rearmament: Hitler and the Nazis believed that the army was a key point in the development of Germany and the Aryan Race. Hitler thought that the army was a good way of maintaining unemployment low and huge numbers of soldiers. Living space: Germany needed to expand its territories and create more living space, and this would be at the expense of Russia, Poland and Austria. ...read more.

They considered peasants as pure Germans. Land, work, home: Hitler and the Nazis said that three million people lacked work and sustenance. Besides, they said that the Jews were living in palaces while soldiers and workers didn't have a place where to live. They wanted to kick out the Jews in order to give a home to them. Also, they demanded land on which to grow grain that will feed children. Propaganda: the best way to reach the masses was through propaganda (posters, leaflets, films and radio broadcasts) that would appeal to people's feelings rather than giving rational arguments. Power: Hitler believed that he would need to get to power within the democratic system and then, once in power, could destroy that system. Children: Hitler educated young children to make them support the Nazi party. ...read more.