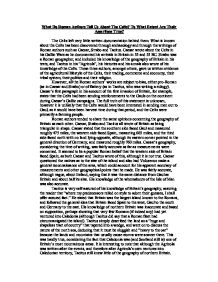 What Do Roman Authors Tell Us About The Celts? To What Extent Are Their Assertions True?

What Do Roman Authors Tell Us About The Celts? To What Extent Are Their Assertions True? The Celts left very little written documentation behind them. What is known about the Celts has been discovered through archaeology and through the writings of Roman authors such as Caesar, Strabo and Tacitus. Caesar wrote about the Celts in his Gallic Wars as he documented his arrivals in Britain in 55 and 55 BC. Strabo was a Roman geographer, and included his knowledge of the geography of Britain in his texts, and Tacitus in his "Agricola", his histories and his annals also wrote of his knowledge of the Celts. These three authors, amongst others, gave us written evidence of the agricultural lifestyle of the Celts, their trading, commerce and economy, their tribal system, their politics and their religion. However, all the Roman authors' works are subject to bias, either pro-Roman (as in Caesar and Strabo) or of flattery (as in Tacitus, who was writing a eulogy). Caesar's first paragraph in his account of the first invasion of Britain, for example, states that the Celts had been sending reinforcements to the Gauls on the continent during Caesar's Gallic campaigns. The full truth of this statement is unknown, however it is unlikely that the Celts would have been interested in sending men out to Gaul, as it would have been harvest time during that period, and the Celts were primarily a farming people. ...read more.

Strabo gave a rather derogatory description of the Celts, naming them "bandy-legged" and "ungainly in build". It is likely that this was written from a very pro-Roman perspective - it is not so likely that all the inhabitants of Britain had bandy legs. Strabo also said that the British were not as yellow-haired as the Gauls, which was probably true, and dark hair is predominant in this country now, and probably always was. Caesar, preoccupied with detailing his military achievements (and failures), wrote little concerning the appearance of the Celts. Tacitus was more detailed, and suggested that the reddish hair and large limbs of the Caledonians proclaimed a Germanic origin, the swarthy faces and curling hair of the Silures could be due to invading Spaniards in ancient times, and the southern inhabitants of the island resembled the Gauls opposite them. Perhaps his explanation for the origins of the Caledonians is truthful, but his suggestion that Spaniards invaded, hence the appearance of the western Celts, seems to have been founded simply on the fact that he believed Spain lay directly to the west of Britain, and therefore the truth of this statement is doubtful. It is also possible that the differences in appearances were caused due to the differences in climate and environment around the island, and that its native people were the original inhabitants. ...read more.

There is no archaeological or other literary evidence to support this statement. Tacitus, like Caesar, wrote little of the actual tribal system in the Agricola, and he was more explanatory where specific encounters with specific tribes was concerned. He did write that "the Britons make no distinction of sex in their leaders". This is not quite true - although Boudicca was queen of the Iceni tribe, female leaders were not quite so well accepted as male ones, as was seen in the case of Cartimandua of the Brigantes. Following an adulterous affair with her husband's armour-bearer, Vellocatus, the people of the tribe were outraged and campaigned for Venutius (her husband) to be their leader. The Romans did not expand much on Celtic politics. The politics of the British tribes appear to have been purely internal affairs, sorted out either entirely within one tribe, or, if a dispute were to be settled involving two tribes, a battle would take place, the winners of the battle winning what they were campaigning for. The Celts did not have a governmental system prior to Roman occupation that included the entire country, and did not have a specific diplomatic political system. The Celtic religion was druidism, a pagan religion. Caesar wrote that the two "privileged" classes were the druids and the knights, and that the druids officiated at the worship of the gods, regulated public and private sacrifices and gave rulings on religious questions. ...read more.