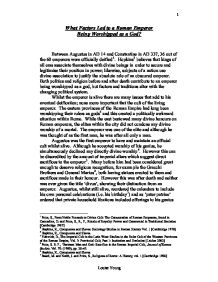 What Factors Led to a Roman Emperor

What Factors Led to a Roman Emperor Being Worshipped as a God? Between Augustus in AD 14 and Constantine in AD 337, 36 out of the 60 emperors were officially deified1. Hopkins2 believes that kings of all eras associate themselves with divine beings in order to secure and legitimise their position in power; likewise, subjects of a nation use divine association to justify the absolute rule of an obscured emperor. Both politics and religion before and after death contribute to an emperor being worshipped as a god, but factors and traditions alter with the changing political system. Whilst the emperor is alive there are many issues that add to his eventual deification; none more important that the cult of the living emperor. The eastern provinces of the Roman Empire had long been worshipping their rulers as gods3 and this created a politically awkward situation within Rome. While the east bestowed many divine honours on Roman emperors, the elites within the city did not condone any divine worship of a mortal. The emperor was one of the elite and although he was thought of as the first man, he was after all only a man. Augustus was the first emperor to have and maintain an official cult whilst alive. ...read more.

Those further down in the social hierarchy need to glorify the emperor in order to venerate their own position. Signs throughout the emperors life that were documented and spread like myths meant that, like the Christian belief in Jesus, the Romans were able to 'prove' the divinity of an emperor. Tacitus19 writes of a miracle performed by the emperor Vespasian in which a blind man and a cripple is cured by Vespasian's touch. The text shows the emperors divinity but also his reluctance to accept this divine gift and an interest in science. These ideas support the suggestion that a Roman emperor was not to encourage divine worship to himself directly, in his lifetime. When looking at the context of Vespasian's reign, he was unexpectedly brought to power and therefore may have felt the need to reinforce his divine nature to secure his dominance20. The use of divine signs to cement divinity was not a new occurrence; in the Augustan age at the Olympic games held in honour of the recently deified Caesar, a comet was said to have been seen in the sky for seven days and that this was a sign from the gods to say that they were pleased about the worshipping of Caesar21. ...read more.

As it has been argued there are many factors that contribute to an emperor being worshipped as a god and it is the combined effect of all these aspects that eventually lead to the official deification. From the Augustan age many emperors attempted to subtly change time to imperial time and likewise religion was altered to create an imperial religion. Hopkins31 argues that our modern rationalistic prejudices prevent us from fully understanding the need for glorifying the Roman hierarchy and we underestimate the power that myth has on the Roman populace. In the first three centuries AD, there was a great belief that emperors were of divine origin and so were to rejoin their ancestry after death in heaven; many literary texts and images depict emperors as 'gods on earth,' and the cults of emperors continue to bestow heavenly honours after their deaths. However, no matter how virtuous the emperor or how much pressure is placed on the senate by the cult of the living emperor or the succeeding ruler, the only title given to a deified emperor is that of 'divus' meaning divine; the title associated with the traditional gods is that of 'deus' meaning god. Even though the emperor is worshipped as a god and is deified by senatorial decree it is arguable that no emperor is ever made a true god of Rome. ...read more.