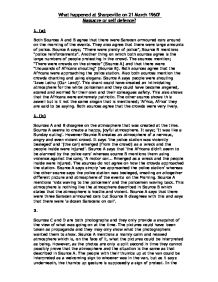 What happened at Sharpeville on 21 March 1960? Massacre or self defence?

What happened at Sharpeville on 21 March 1960? Massacre or self defence? 1. (a) Both Sources A and B agree that there were Saracen armoured cars around on the morning of the events. They also agree that there were large amounts of police. Source A says; "There were plenty of police", Source B mentions "police reinforcements". Another thing on which both sources agree is the large numbers of people protesting in the crowd. The sources mention; "There were crowds on the streets" (Source A) and that there were "thousands of Africans shouting" (Source B). Both sources agree that the Africans were approaching the police station. Also both sources mention the crowds chanting and using slogans. Source A says people were shouting 'Izwe Lethu (Our Land)'. This chant could have created an intimidating atmosphere for the white policeman and they could have become angered, scared and worried for their own and their colleagues safety. This also shows that the Africans were extremely patriotic. The other source shows this aswell but is it not the same slogan that is mentioned; 'Africa, Africa' they are said to be saying. Both sources agree that the crowds were very lively. 1. (b) Sources A and B disagree on the atmosphere that was created at the time. Source A seems to create a happy, joyful atmosphere. It says; 'It was like a Sunday outing'. However Source B creates an atmosphere of a nervous, angry and even violent crowd. It says 'the police station was violently besieged' and '[the car] emerged [from the crowd] as a wreck and the people inside were injured'. ...read more.

Both Sources G and E seem to give the impression that no weapons were found around the bodies of the dead. I think that Source G is more useful because it is not really a person's opinion it is just a photograph whereas the persons opinion could have been biased or he many have not been telling the truth. 5. (a) South Africa is a nation with many different cultures and races. The South African authorities were white and were mainly descendants of the Dutch settlers, the Boers. There were also many black tribes in South Africa including the Bantu farmers, the Xhosa and the Khoisan. The British, Germans and French also had settled in South Africa in the 19th century and before. In the early 20th century (1910 onwards) the South African government started to become mainly made up of people from the Boer or white races. Up until 1948 there was a growing feeling among the white population that blacks and coloured people were inferior and should be controlled and many laws were passed that required blacks to give up land (1913 Land Act) or work for the whites. In 1948 Malan the newly elected President claimed that South Africa belonged to the Afrikaners (Boers) and he set up the apartheid state which restricted blacks even more. Blacks were made to carry passes and had to have different education. This created a great deal of hatred and on the whole the blacks and whites did not like each other. This created a sense that the blacks were inferior to the whites. ...read more.

I think that the second interpretation is poorly backed up because they are mainly people in the South African authorities who may be biased against the Africans. 7. People disagree about the events at Sharpeville because there is no conclusive evidence to show what has happened and people would hear different information from different sources like the ones shown. If somebody had seen Source B they would probably have different views to somebody who had seen Source E. Also there is still some tension between the blacks and whites in South Africa and around the world so people may stick up for their racial group because they were so used to being separate for so long. Different Sources disagree about the basic fact such as how many people were at Sharpeville. It is also hard to tell what really happened because the sources could be biased. For example Dr. Verwoerd the South African Prime Minister would be likely to be biased against the blacks because after all he was encouraging the separation of blacks and whites. Also eyewitnesses at Sharpeville may be exaggerating the truth. It appears that sources A, C, E and F are all against the actions of the police that caused the events at Sharpeville, they all either show the supposedly happy and joyful crowd before the event or the dead and wounded after the event. The other sources, B, G, H and I appear to be supporting the idea that the police where acting in self defence at Sharpeville, these sources suggest that the South African police were provoked and had no other option but to fire on the crowd. ...read more.