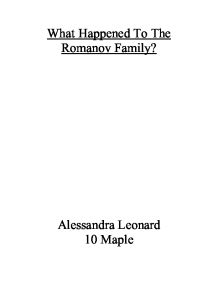 What Happened To The Romanov Family

What Happened To The Romanov Family? Alessandra Leonard 10 Maple 1) Source A and B are not necessarily reliable because they give similar accounts. Firstly they were both written in 1918, both reports. They also both involved Judge Sergeyev's opinions/views on the matter. Source A talks of Sergeyev's findings in the case. He was a supporter of the provisional government. He was appointed to investigate what had happened , but was mysteriously sacked, and also died shortly afterwards in mysterious circumstances. This may have been to do with that some of his findings in the investigation were supporting the Bolsheviks, rather than the Tsar. Again in source B Sergeyev is the person to give all the evidence which was then used as a report to the British Government. It also states that 'There is no real evidence as to who or how many victims there were.' Also in the report the words 'supposed' are used a lot, showing that there is no real answer. Therefore sources A and B are not definitely reliable because they give similar accounts. The reliability of sourced A and B is also bought into question by what is said in source C 'My predecessor, Sergeyev, on handing the case to me, had no doubt about the fact that the entire Romanov family had been massacred in the Ipatiev House. ...read more.

Source E comes from information by Medvedev's wife that had been told by Medvedev. He may have been telling his wife the truth and not the white interviewers, or vice versa. Showing that just because it is an eyewitness account it doesn't mean it is reliable account. 4) As source F is a photograph it would be presumed that that was most reliable and useful. Though this photo could have been set up and made to look as if it was the place of the murders, and then photographed. Though source B does support this photo, as it describes the image of the bloodstained walls. Though, the photograph could have been created after source B was written to make it seem more realistic, and that it would also have a source to back the photo up. Source G is just a painting, so there is no real evidence That this was what happened. The painting was also based on an investigation carried out by the whites , therefore the painting would be very biased and sympathetic towards the Tsar and his family. Source H is a diagram of the positioning of the Romanov family and the guards before the murders. The diagram was made from eyewitness accounts. It also does not state from which side the witnesses were from, therefore it is probably not biased. ...read more.

It is surprising that source I says that they were killed at different times, but there bodies were later found together. 6) Source J does confirm most of the other sources, and that the family were supposedly all killed together, and buried together. Although two of the children were missing from the burial pit, Anastasia, and Alexei. As the bodies weren't found till nearly 80 years later, the bones went under a series of DNA tests, and were identified as the Romanov's. This supports the other sources, for example sources A,B,C and D all claim that the murders took place together and Sources F,G and H also support that the murders happened in the Ekaterinburg. Most of the evidence available about what happened comes from the two investigations carried out by the whites, but the reds recaptured Ekataterinburg before the investigations were completed. Source J also confirms that 'they had to be finished off by bayonets.' This evidence confirms source c which states that 'The murder was carried out using revolvers and bayonets.' There is new information in this source, that 'the bodies were driven to a mine and then the mine blown up by grenades. As none of the other sources state what happened to the bodies after the murders. This was an article from a British newspaper in December 1994, so it took 3 years since archaeologists opened the burial pit for the information to finally get to the papers about the Romanov's. By Alessandra Leonard 10 Maple ?? ?? ?? ?? ...read more.