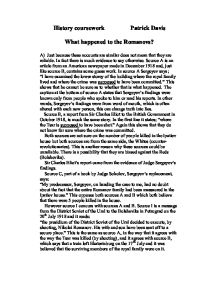 What Happened To The Romanovs

History coursework Patrick Davis What happened to the Romanovs? A) Just because these accounts are similar does not mean that they are reliable. In fact there is much evidence to say otherwise. Source A is an article from an American newspaper made in December 1918 and, just like source B, contains some guess work. In source A Sergeyev says; "I have examined the lower storey of the building where the royal family lived and where the crime was supposed to have been committed." This shows that he cannot be sure as to whether that is what happened. The caption at the bottom of source A states that Sergeyev's findings were known only from people who spoke to him or read his reports. In other words, Sergeyev's findings were from word of mouth, which is often altered with each new person, this can change truth into lies. Source B, a report from Sir Charles Eliot to the British Government in October 1918, is much the same story. In the first line it states; "where the Tsar is supposed to have been shot." Again this shows that they do not know for sure where the crime was committed. Both sources are not sure on the number of people killed in the Ipatiev house but both sources are from the same side, the Whites (counter-revolutionaries). ...read more.

I believe this because it is a diagrammatic view of the people who were in the room at the time of the murders. This diagram is from Sokolov's book and is based on the information he was given by a witness during an interview. Who the interviewee was, we don't know but it is possible that they were not telling the truth. However, the diagram does seem to fit. Take source F and compare the scenery in that picture to that of source H. In the diagram, it is pictured that the Tsar, his family and their servants are near to the storeroom door. This looks the same as in the picture, although we cannot tell what is behind the scenes of the photograph or indeed what is actually happening. Who took the photograph? When? Standing just infront of the wall is the obvious place where the victims would have been standing as the damage to the wall is incredible and looks to have been caused by the removal of something in it, possibly bullets during Sergeyev's investigation. Both sources F and H together would actually help historians the most as they show where the people were standing and the surrounding background, of where the royal family were standing, and you can then weigh up how and where it all happened. ...read more.

as Medvedev had said that he had been involved in killing all of the family when two of the family's children were possibly not there. This is a further indication that his statement was obtained under coercion. There are more points in source J which seem to substantiate parts of the other sources. Like the fact that marks on some of the skeletons meant that some of the bodies had to be finished off by bayonet (source C) and also that the bodies were transported by lorry to a mine to be disposed of. However, source J does not say that the bodies were chopped up and burnt but does say that the bodies were later removed from the mine and dumped in a swamp because of the mine not collapsing when the grenades went off. In conclusion source J shows that many of the other sources had their own accuracies and inaccuracies and that by piecing them together you will get closer to an answer but, with the information given, it will be extremely difficult to provide and prove an exact and precise one. Unfortunately, we cannot make an assumption as to the strict happenings of those fateful few days, with these sources, but to aid further will be to find out what happened to the two missing children and the heir to the throne. ...read more.