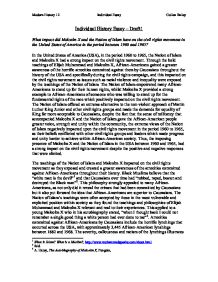 What impact did Malcolm X and the Nation of Islam have on the civil rights movement in the United States of Americain the period between 1960 and 1965?

The Nation of Islam also used African history to unite and empower African-Americans who had limited knowledge of any racial history, as Malcolm X stated, "one of the things that made the Black Muslim movement grow was its emphasis upon things African. African blood, African origin, African culture, African ties. And you'd be surprised - we discovered that deep within the subconscious of the black man in this country, he is still more African than he is American."6 The united African-American front of the Nation of Islam is illustrated in the establishment of This outspoken and strong leadership of Malcolm X, similarly impacted upon the civil rights movement as African-Americans began to follow the example Malcolm X set as demonstrated through the testimony of a militant following Malcolm X's death, "What made Malcolm X a great man, is that he had the guts to say what nine-tenths of American Negroes would like to say but don't have the guts to say".7 Malcolm X attracted many African-Americans to the Nation of Islam through promoting a religion that was perceived to stand up for African-Americans against Caucasians, "I believe in a religion that believes in freedom. Any time I have to accept a religion that won't let me fight a battle for my people, I say to hell with that religion"8. ...read more.

The strong, purposeful philosophies of Malcolm X who was renowned for his famous "by any means necessary" statement, gave African-Americans a militant figure who was prepared to physically fight Caucasians. This appealed to many African-Americans who wanted to counteract Caucasian violence with violence. Malcolm X's consistent threat to the Caucasian community also impacted on the civil rights campaign as Caucasians felt threatened by the Nation of Islam and Malcolm X. The creation of the militant African-American, Black Panther Party, "in the wake of the assassination of black leader Malcolm X"12, in 1966, illustrates the impact of Malcolm X's militant that inspired the creation of this group that Federal Bureau of Investigation chief J. Edgar Hoover described as, "the greatest threat to the internal security of the United States"13. Conclusion 1 What is Islam? What is a Muslim?, http://www.muhammadspeaks.com/about.html 2 ibid. 3 A. Haley, The Autobiography of Malcolm X, Penguin, 4 R.W. Logan, The betrayal of the Negro: From Rutherford B. Hayes to Woodrow Wilson, New York, Macmillan, P.239. 5 The Nation of Islam, http://www.noi.org.html 6 The Official Website of Malcolm X, www.cmgww.com/historic/malcolm/quotations.html 7 ibid. 8 ibid. 9 ibid. 10 The Official Website of Malcolm X, www.cmgww.com/historic/malcolm/quotations.html 11 Malcolm X,"God's angry men", WO, 31 May 1958 (FBI files 105-8999-788) 12 The Black Panther, http://www.blackpanther.org/TenPoint.htm 13 ibid. Modern History 12 Individual Essay Cullen Bailey ...read more.