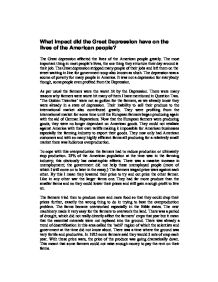 What impact did the Great Depression have on the lives of the American people?

What impact did the Great Depression have on the lives of the American people? The Great depression affected the lives of the American people greatly. The most important thing in most people's lives, the one thing they structure their day around is their job. The Great depression stripped many people of their jobs and left them on the street waiting in line for government soup also known as slush. The depression was a source of poverty for many people in America. It was not a depression for everybody though, some people even profited from the Depression. As per usual the farmers were the worst hit by the Depression. There were many reasons why farmers were worst hit many of them I have mentioned in Question Two. 'The Golden Twenties' were not so golden for the farmers, as we already know they were already in a state of depression. Their inability to sell their produce to the international market also contributed greatly. They were profiting from the international market for some time until the European farmers began producing again with the aid of German Reparations. Now that the European farmers were producing goods, they were no longer dependant on American goods. ...read more.

This meant that some farmers could not raise enough money to pay the rent on their farms. There was different ways of dealing with their eviction or attempted eviction. Some people just took it and became hoboes travelling about the country in search of work on freight trains. Others armed themselves with pitchforks and defended their land. Others also put up nooses around their garden in an attempt to scare off officials. It was not only in the country that there was great poverty. For a change the city too was in great poverty. Shantytowns were springing up all of America usually on the outskirts. The impoverished people blamed their poverty and in my opinion quite rightly on the current government under the leadership of Edgar Hoover. They called these shantytowns Hoovervilles. He did nothing to help the unemployed of America. Even in this time of catastrophe and need the government still had a laissez-faire policy. They did not give out enough welfare for the American people; there was not enough care and benefits for the unemployed. The government did make feeble efforts to give soup to the people, although even to the taste buds of the starving people it was repulsive 'slush.' ...read more.

They though why should I have a black man working for me when there are white people starving on the streets. Almost all black were employed in the farming industry so they were very harshly hit. So this was obviously a time of great suffering for the most of the American people. I say most because not all suffered, some people gained from the depression. Those with savings, those who had not blown their money in the stock market were the winners. There was no inflation of the dollar. The price of food and goods had gone down so those with savings could now by more for their dollar. This made it easy to economise in a time of little spending. The stockbrokers had predicted a crash since 1928 and had pulled their money out of the stock market. They enjoyed the watching the value of their money rise in their pocket. For many people it was very demoralizing, especially skilled people. They were in the same position as unskilled labourers although they should be in a much better position due to their training and education. In depressions people become desperate and because of this people did anything they could to survive, steal, beg, anything this is why crime levels went up so much. ...read more.