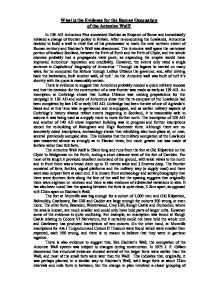 What is the Evidence for the Roman Occupation of the Antonine Wall?

What is the Evidence for the Roman Occupation of the Antonine Wall? In 138 AD Antoninus Pius succeeded Hadrian as Emperor of Rome and immediately initiated a change of frontier policy in Britain. After re-conquering the Lowlands, Antoninus decided to build a wall to rival that of his predecessor to mark the new northern extent of Roman territory and Hadrian's Wall was abandoned. The Antonine wall spans the narrowest portion of lowland Scotland, between the Firth of Forth and the Firth of Clyde, and the whole exercise probably had a propaganda view point, as expanding the empire would have improved Antoninus' reputation and credibility. However, the events only rated a single sentence in Capitolinus' biography of Antoninus: 'Through his legates he carried on many wars; for he conquered the Britons through Lollius Urbicus the governor, and, after driving back the barbarians, built another wall, of turf.' As the Antonine wall was built of turf it's identity with the quote is reasonably certain. There is evidence to suggest that Antoninus probably needed a quick military success and that the decision for the construction of a new frontier was made as early as 139 AD. An inscription at Corbridge shows that Lollius Urbicus was making preparations for the campaign in 139 AD and coins of Antoninus show that the re-conquest of the Lowlands had been completed by late 142 or early 143 AD. Corbridge had been the site of one of Agricola's bases and at this time was re-garrisoned and re-equipped, and as earlier military aspects of Corbridge's history always reflect events happening in Scotland, it is reasonably safe to assume it was being used as a supply route to move further north. ...read more.

However, if this were the case we would expect the distances built by Legio II to be far greater than those constructed by the other two and this is not so. There is further evidence to suggest that each legion was divided up into two working parties, so we may assume that the greater part of all three legions were present. Duplicate stones were set up at the end of the lengths built by each party, but no cohorts or centuries left records as they did on Hadrian's Wall. Aerial photography discovered fourteen marching camps near the line of the Wall which were probably the housing for the construction parties. There seems little doubt that the occupation of the Antonine Wall was developed into a complex frontier system, but the question remains as to why it was built, particularly after so much time, effort and expense had been put into the Hadrianic system. There is very little direct evidence so most theories depend heavily upon assumptions and circumstantial evidence. It is thought that the Greek writer Pausinias refers to these events when he says, 'Antoninus Pius never willingly made war; but when the Moors took up arms against Rome he drove them out of all their territory.....Also he deprived the Brigantes in Britain of most of their land because they too had begun aggression on the district of Genunia whose inhabitants are subject to Rome.' However, this suggests that Pausinias thought the Brigantes were outside the province, but they had been within it for more than sixty years, so he may well have his facts mixed up and probably meant a tribe further north. ...read more.

Excavators found evidence that the fortlet at Lynne was replaced by a full sized fort and that Loudoun Hill and Carzield were abandoned and not rebuilt. The second occupation of the Antonine Wall was strong and nothing much happened on the Wall or north of it, suggesting that the trouble may have been in southern Scotland and the purpose of the Wall was to separate the tribes in Scotland, preventing conflict between them. Whilst Antoninus Pius lived, Scotland continued to be held, probably because it was the major military achievement of his reign. However after his death in 161, he was succeeded by Marcus Aurelius and policy in the north was re-assessed objectively. It had become obvious that there were just not enough troops to control the vast area between the Pennines and the Forth and in 163 Calpurnius Agricola was sent as governor, the Scriptores Historae Augustae says 'War was threatening in Britain and Calpurnius was sent to deal with it.' Calpurnius rebuilt a number of forts in northern England so it was probably he who implemented the decision to, yet again, withdraw Roman troops from Scotland. Certainly small quantities of late Antonine pottery, found by excavators at Glenlochar proves that the area was sparsely populated and that there was no occupation of the Antonine Wall by 165 AD. Under Marcus Aurelius, Scotland was not totally abandoned, but troops were needed to keep a firmer grip on territory further south and he was probably responsible for the reorganisation and re-occupation of Hadrian's Wall. ...read more.