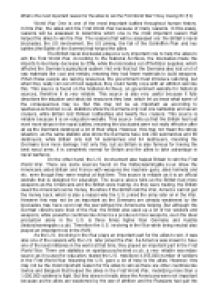 What is the most important reason for the Allies victory in the First World War?

﻿What is the most important reason for the allies to win the First World War? Roxy Kwong 8C (10) World War One is one of the most important battles throughout human history. In this War, the allies won the First World War because of many reasons. In this essay, reasons will be assessed to determine which one is the most important reason that helped the allies to win the War. The reasons that will be assessed are: the British?s naval blockades, the US involvement, the US joining, the fail of the Schlieffen Plan and key battles (the Battle of the Somme) that helped the allies. The British naval blockades played a very important role to help the allies to win the First World War. According to the National Archives, the blockades made the imports to Germany decrease by 55%, while the blockades cut off fertilizer supplies, which affected the German?s agricultural system. Not only that but the Germans also lost a lot of raw materials like coal and metals, meaning they had fewer materials to build weapons. When these people are lacking resources, the government must introduce rationing, but when they really ran out of food supplies, they could hardly cope with an attrition war like this. This source is found on the National Archives, an government website for historical sources, therefore it is very reliable. ...read more.

involving in the War while being neutral also played an important role in the WWI. As the U.S. involving in the War plays an important part for the allies to win, it was also one of the reasons why the U.S. later joined the War. As America was known to have one of the best militaries in the world at that time, they played an important part in the First World War. There are statistics on spartacus.schoolnet.co.uk, a very reliable secondary source as it is used for education, stated the U.S. mobilized 4,355,000 number of soldiers in the First World War. Meaning the U.S. gave a lot of help to the allies. However, this may not be the most important reason for the allies to win as there are other countries like Serbia and Belgium that helped the allies in the First World War, mobilizing more than a 1,000,000 soldiers to fight. But this does not really show the Americans were not important because as the allies are weakened by the war of attrition and the Russians had quit the war. When the Americans join, it strengthens the allies power and therefore make them win the War easier. The reasons above are reasons of the advantages of the allies. The problems the Central Powers face could also be a huge reason why they lost the War. One of the major mistakes the Germans made was to use the Schlieffen?s plan. ...read more.

This quote was found from the www.historyofwar.org, a reliable source of information as the information was written by military history experts. This quote works like a metaphor as it compares a ?muddy grave? to the situation, meaning the death numbers were really high as it states it was the entire army?s grave. But, losing one battle may not be a very important reason for losing the entire war. Just like a tennis game, losing one point does not mean you lose the game, there are chances to catch up. But this really had a huge impact on the German army because it made them lose their hope to win the War, meaning it has a long-term effect on the soldiers and this will possibly make the Germans lose many battles. These are all very important reasons for why the Allies won the war, each of these reasons do make a huge difference. From these reasons above, the Blockades were probably the most important reason of all because fighting a war of attrition like this do require a huge amount of resources. Not only the blockades starved the people back in the German home front, it also reduced the amount of resources that can be used in the trenches. Meaning the Blockades affected a wide range of areas. To conclude, out of all these reasons above, the most important reason of the allies winning the WWI was because of the British naval blockades. ...read more.