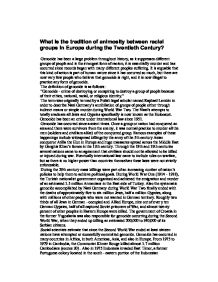 What is the tradition of animosity between racial groups in Europe during the Twentieth Century?

What is the tradition of animosity between racial groups in Europe during the Twentieth Century? Genocide has been a large problem throughout history, as it suppresses different groups of people and is the strongest form of racism, it is essentially murder and has occurred since records began with many different peoples suffering. It is arguable that this kind of action is part of human nature since it has occurred so much, but there are now very few people who believe that genocide is right, and it is now illegal to practice any form of genocide. The definition of genocide is as follows: "Genocide - crime of destroying or conspiring to destroy a group of people because of their ethics, national, racial, or religious identity." The term was originally termed by a Polish legal scholar named Raphael Lemkin in order to describe Nazi Germany's annihilation of groups of people either through indirect means or simple murder during World War Two. The Nazi's attempts to totally eradicate all Jews and Gypsies specifically is now known as the Holocaust. Genocide has been an crime under international law since 1951. Genocide has occurred since ancient times. Once a group or nation had conquered an area and there were survivors from the enemy, it was normal practice to murder all the men (soldiers and civilians alike) of the conquered group. Famous examples of these happenings include widespread killings by the army of the 5th century Asian conqueror Atilla the Hun in Europe and huge massacres spread across the Middle East by Genghis Khan's forces in the 13th century. Through the 18th and 19th centuries several nations came to an agreement that civilians should not be allowed to be killed or injured during war. Eventually international law came to include rules on warfare, but as there is no higher power than countries themselves these laws were not strictly enforceable. ...read more.

There was also the mass anti-Jew Propaganda in which posters and cartoons were used in order to make the German people support the Nazi's actions which were taken against the Jews and to slowly make the people less and less bothered about the unfair treatment of the Jews, as they blamed the Jews for their problems and supported the ideas of the Nazis. By 1938 this abuse of the Jew's rights developed into physical abuse, the first example being 'the night of the broken glass.' On that night, which has become infamously known as Kristallnacht, more than 30,000 Jews were sent to concentration camps, and many murdered. 191 synagogues throughout Germany were set on fire, and 76 were completely destroyed; 815 Jewish-owned shops were demolished, 29 warehouses and 171 homes were set on fire or likewise destroyed. The Jews were being physically attacked with war efforts in their own country, only because of their grandparents blood. This was a huge step made by the Nazis as it was the first time in which the Jews were not sanctioned, but actually attacked. Kristallnacht was a general riot planned and executed by the Nazi government and was an attack on Jews and Jewish businesses wherever they were found. The program to eventually exterminate the Jews became far more serious during the Second World War, as the Nazis were able to get away with more atrocities as surrounding countries were much else able to intervene with what they were doing. Conquered cities like Warsaw and Lodz were converted into Jewish ghettos, many Jews died there due to the awful conditions in which the Jews had to live in, whilst this occurred concentration camps (source 18) were being set up in Poland and conquered regions of the Soviet Union. Jews were killed in all of this places in varying ways, including gassing, and mass shootings (source 11). Jewish leaders and other opposition figureheads were rounded up and executed systematically to further suppress the people. ...read more.

A peace accord was declared after three weeks of negotiations. The main terms of the agreement were that Bosnia would now be partitioned into the Bosnian Serb Republic and the Muslim-Croat Federation, along with calling for democratic elections and stipulated that was criminals would be handed over in order to be prosecuted. NATO deployed 60,000 soldiers (source 24) to preserve the new cease-fire. By now, the genocide of the Muslims had reached a figure over 200,000 deaths, with another 20,000 missing and feared dead, and a further 2,000,000 people becoming refugees. According to US Assistant Secretary of State Richard Holbrooke (source 23) , it was: "the greatest failure of the West since the 1930s." (source 10) The example of the genocide in the Balkans shows that the attempts to solve racial divisions throughout the Twentieth Century have been almost entirely unsuccessful. It has shown that when different types of people are forced together they almost always end up in conflict, and it seems that the only alliances between people come through necessity (e.g., Muslim-Croat coalition) and not through voluntary actions. What occurred in the Balkans in the 1990s holds many similarities to the Holocaust, depicting the reluctancy of other countries to stop these crimes against humanity, and this shows that ideas have not developed enough for countries to police one another, but also that countries understand that if a different country tries to interfere in another's business, then it could be creating yet more racial divisions. The genocide in the Balkans suggests a failure to solve racial divisions clearly and simply, as all countries involved where also part of the Second World War and new what occurred in the Holocaust, and they could have learned the lessons of what had occurred, the racial divisions which caused the killings were present even at those times, so if they caused genocide in the 1990s, then it is clearly a failure in solving racial divisions in the Balkans and all over Europe. ...read more.