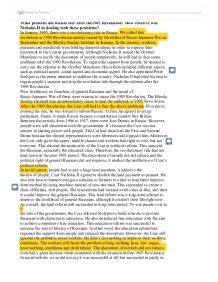 What problem did Russia face after the1905 Revolution? How effective was Nicholas II in dealing with these problems?

What problem did Russia face after the1905 Revolution? How effective was Nicholas II in dealing with these problems? In January 1905, there was a revolutionary tide in Russia. We called this revolution as 1905 Revolution mainly caused by the defeat of Russo-Japanese War in September and the Bloody Sunday Incident in January. In the country, workers, peasants and merchants were holding demonstrations in order to express their discontent to the Czarist government. Although Nicholas II issued the October Manifesto to pacify the discontent of people temporarily, he still had to face some problems after the 1905 Revolution. To regain the support from people, he needed to carry out the reforms in the October Manifesto. His reform included different aspect, such as political aspect, social aspect and economic aspect. He also appointed Peter Stolypin as the prime minister to stabilize the country. Nicholas II had tried his best to regain people's support and stop the revolution tide through the reforms after the 1905 Revolution. ...read more.

In social aspect, people had to pay a huge land payment, it added to the burden of people. Czar Nicholas II agreed to abolish the land payment to peasant. He also lent loan to farmers and gave subsides to farmers in order to lead them improve farm method by using machine instead of cow and man. This succeeded to create a class of Kulaks, rich people. The land reform had created a rich class at first, and then it would improve the general Russians. This land reform was a long-term scheme to improve the livelihood of general Russians, although it couldn't their life right now. As a result, the land reform still succeeded in long-term period. To win people over to 2 the side of the government, the Czar allowed Stolypin to build schools to provide Russians with eleme ntary education. He also introduced free education with the aim to achieve compulsory free education. This education reform was successful to increase the rate of literacy of Russians. ...read more.

The revolutionary tide even seemed to be died down. Therefore, the industrial reform in Russia was effective. Although the Czar had adopted reforms, it could not reduce the discontent of Russians at all. Russians still felt discontented with the Czar, especially the intellectuals. Intellectuals felt discontent with the Czar because they thought the Czar was an unrepresentative nature of the government. Moreover, they had no right to vote in Duma. The general people had no voice in Duma, except the nobles and rich people. The peasants were also discontent with the Czarist government. The peasant still cultivated with a small piece of plot, their livelihood didn't have much improve. The workers also had no improvement about their poor working condition. The discontent of those Russians had not reduced by Czar's reforms. On the other hand, The Czar had achieved the aims in some reforms, such as education reform, industrial reform and land reform. However, when compared with the whole national reform, these reforms only represented partly success. The discontent of people had not reduced so much, even nearly remain unchanged or increased. In conclusion, Nicholas II was not effective in dealing with problems after 1905 Revolution. ...read more.

This is a well structured response, which examines each key area of reform and weighs up evidence for and against Nicholas II's effectiveness. The author's opinion is strongly conveyed, which improves the essay but the language is stilted and this hinders the flow of the answer. 4 stars.