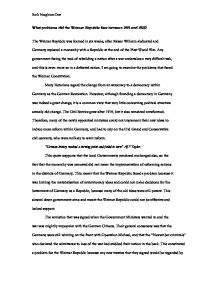 What problems did the Weimar Republic face between 1919 and 1923?

What problems did the Weimar Republic face between 1919 and 1923? The Weimar Republic was formed in six weeks, after Kaiser Wilhelm abdicated and Germany replaced a monarchy with a Republic at the end of the First World War. Any government facing the task of rebuilding a nation after a war undertakes a very difficult task, and this is even more so in a defeated nation. I am going to examine the problems that faced the Weimar Constitution. Many historians regard the change from an autocracy to a democracy within Germany as the German Revolution. However, although founding a democracy in Germany was indeed a great change, it is a common view that very little concerning political structure actually did change. The Civil Service grew after 1919, but it also remained unreformed. Therefore, many of the newly appointed ministers could not implement their new ideas to induce more reform within Germany, and had to rely on the Old Guard and Conservative civil servants, who were unlikely to want reform. "German history reached a turning point and failed to turn" AJP Taylor. This quote supports that the local Governments remained unchanged also, so the fact that the monarchy was removed did not mean the implementation of reforming actions in the districts of Germany. This meant that the Weimar Republic faced a problem because it was limiting the materialisation of revolutionary ideas and could not make decisions for the betterment of Germany as a Republic, because many of the old ideas were still potent. This slowed down government aims and meant the Weimar Republic could not be effective and lacked support. The armistice that was signed when the Government Ministers wanted to end the war was mightily unpopular with the German Citizens. ...read more.

This caused great dissatisfaction among the citizens. Unemployed German soldiers opposed the Treaty of Versailles and proposed a serious threat to the government as they were skilled and highly trained in over throwing people. The loss of a powerful army was also damaging to pride and inspired more hatred for the Weimar Republic because the army was the symbol of power and stength. This was a serious threat to the Republic, perhaps more so than the loss of the individual districts such as Danzig because unemployed soldiers are likely to join radical rebellious groups who have room for military action in their hopes for revolution, thus putting the whole constitution at immediate risk. The Navy was also restricted. Germany was not allowed to unite with Austria (Anschluss) under the Treaty of Versailles and nor was she allowed to join the League of Nations. This made Germany have no say in what was to happen to her regarding the terms on the treaty, and also meant that she was not allowed to gain support to prevent being abused from her close ally Austria. This put Germany in a very unsafe position, especially seen as the Rhineland was demilitarised, and she was open to attack from the French at any time, and could not defend herself because she had both a small army and no help from other countries. This was a less important problem than the loss of economically supportive parts of Germany, but it reduced national pride and reduced the strength of the nation and so reduced support for the Weimar Republic. Uprisings from the left wing proposed problems to the rule of the Weimar Republic. ...read more.

The citizens savings were lost and the government could not help the economic situation which lead to widespread starvation and in turn more people looking to radical extremists such as the newly founded Nazi Party, for help. The people blamed the Weimar Republic for Hyperinflation for accepting the War Guilt clause and agreeing to such high reparations. This was a very serious problem for the government because all of the other problems, although major, did not inflict serious change to the average German's life. Hyperinflation affected everyone all over Germany and posed a threat to being a catalyst to revolution. This situation could be arguably the single most dangerous threat to the Weimar, although it could also be argued that it is just another inevitable bad situation, which sprang from the high demands set by victorious nations and Government inadequacy to propose major reform. The Weimar Republic faced many problems when coming to power after the war. Not only was their country bankrupt from the monetary demands of the war, but they faced situations that meant they could not successfully rebuild their economy. The problems all seemed to stem from the fact that the Treaty of Versailles did not give Germany a fair chance to improve herself, and did not give a fair chance to the Weimar Republic to gain support. The country seemed to be on an exponential course for doom. Decreasing support for the Republic due to damaged national pride meant an increase in support for extremist parties. Also being forced to sign treaties that professed Germany was guilty and demanding reparations that were too high did not help the Weimar in her popularity. In conclusion the Treaty of Versailles meant that the Weimar Republic could not establish a strong government and thus she encountered many branched problems. Ruth Naughton-Doe ...read more.