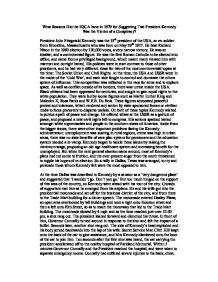 What Reasons Did The HSCA Have in 1979 for Suggesting That President Kennedy Was the Victim of a Conspiracy?

What Reasons Did the HSCA have in 1979 for Suggesting That President Kennedy Was the Victim of a Conspiracy? President John Fitzgerald Kennedy was the 35th president of the USA, an ex-soldier from Brookline, Massachusetts who was born on May 29th 1917. He beat Richard Nixon in the 1960 election by 120,000 votes, a very narrow victory. He was an idealist, and a controversial figure. He was the first Roman Catholic to be elected into office, and came from a privileged background, which meant many viewed him with mistrust and outright hatred. His policies were in start contrast to those of other presidents, and he had very different ideas for two of the most controversial topics at the time: The Soviet Union and Civil Rights. At the time, the USA and USSR were in the midst of the 'Cold War', and each side fought to control and dominate the others sphere of influence. This competition was reflected in the race for arms and to explore space. As well as conflict outside of its borders, there was unrest inside the USA. Black citizens had been oppressed for centuries, and sought to gain equal rights to the white population. They were led by iconic figures such as Martin Luther King and Malcolm X, Rosa Parks and W.E.B. Du Bois. These figures advocated peaceful protest and tolerance, which rendered any action by state-sponsored forces or civilian mobs to force protesters to disperse useless. On both of these topics Kennedy wished to pursue a path of peace and change. He offered wheat at the USSR as a gesture of peace, and proposed a new civil rights bill to congress. His actions sparked hatred amongst white supremacists and people in the southern states of America. Aside from the bigger issues, there were other important problems facing the Kennedy administration: unemployment was soaring in rural regions, crime was high in urban areas, there was no state benefits of care plan system for pensioners and the education system needed a re-vamp. ...read more.

He had a difficult childhood, as his mother married and divorced, he attended three different schools and it took him over 3 years to complete the third grade. His two brothers joined the Armed Forces, and from the age of twelve he lived alone with his mother. His continued bad behaviour at school led to him undergoing psychiatric treatment. Reports described Lee as 'seriously withdrawn, detached and very hard to reach'. But Oswald's mother would not comply with the authorities requests for sending Lee into psychiatric care, and they moved back to New Orleans. Around this time Lee became interested in Communism and he wrote letters to communist societies. Six days after his seventeenth birthday he joined the US Marine Corps and received basic weapons training. He came under court martial twice; once for abusing an officer and again for possession of an unregistered weapon. For a time, Lee lived in the Soviet union, where he married Marina Pruskova. He then returned to America and got a job at the Dallas Book Depository. Oswalds turbulent childhood and communist ideals suggests that he could have had strong reasons to kill the President, but his background also gives the impression he would have made an excellent fall-guy for a conspiracy. His life fits the profile of a deranged, lonely murderer perfectly. His weapons training would account for his ability to shoot Kennedy, but his affiliation with communist groups suggests it was unlikely he would have been working alone. The most suspicious part of the case involving Oswald was his death at the hands of Jack Ruby. The HSCA took down eyewitness reports that suggested that the two men knew each other. One witness said that they had seen the two men converse in Rubys nightclub, and two eye witnesses described a man who could have been the short, heavy set Jack Ruby standing on the same floor Oswald supposedly stood during the assassination. ...read more.

Their conclusions were 'four shots, over a period of 7.91 seconds were fired at the Presidential limousine. The first, second and fourth came from the depository, the third came from the grassy knoll.' This fits with the Zapruder film, and contradicts the Warren Commissions findings, compromising any theory of there being only one gunman. There were doubts over the Warren Commissions findings that needed to be addressed, and to an extent the HSCA confirmed that there was indeed a conspiracy. But the committee never found who the conspirators where. This highlights the reasons why the committee was set up, to help public relations. Its findings conflicted with those made at the time of the assassination, and this eased the public's suspicions. But still, no complete closure was ever made, with the only real suspect dead, and with most of the key evidence and witnesses gone forever. Evidence aroused suspicions of who the conspirators could have been. There have been several prominent ideas: 1) The Russian Communist Theory: the idea that the KGB had plotted to assassinate Kennedy, with help from double agents inside the USA. 2) The Pro-Castro Theory: The assassination was planned by Cuban intelligence, in conjunction with Fidel Castro. 3) The American Intelligence Theory: members of Americas own intelligence agencies had plotted to assassinate Kennedy. Some have also suggested that agencies and factions had worked together to kill Kennedy, but this is unlikely, as some would never have worked together ie Cuba and America. However, the conclusions made by the HSCA have their faults. The investigations were undertaken 13 years after the Warren Commission, and by that time most evidence, some very crucial, had been lost (eyewitness deaths etc). This would have made any investigation difficult and the findings less accurate. Also there could be unfair bias in the findings of the HSCA, as the whole purpose it was set up for was to ease the public's suspicion of the government. A new verdict confirming the public's doubts over the Warren Commission would be highly convenient, and so the neutrality of the investigation is questionable. ...read more.