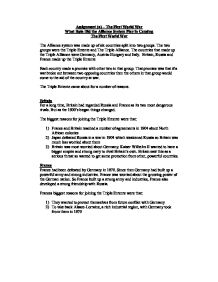 What Role Did the Alliance System Play in Causing The First World War?

Assignment (a) - The First World War What Role Did the Alliance System Play in Causing The First World War The Alliance system was made up of six countries split into two groups. The two groups were the Triple Entente and The Triple Alliance. The countries that made up the Triple Alliance were Germany, Austria-Hungary and Italy. Britain, Russia and France made up the Triple Entente Each country made a promise with other two in that group. That promise was that if a war broke out between two opposing countries then the others in that group would come to the aid of the country at war. The Triple Entente came about for a number of reasons. Britain For a long time, Britain had regarded Russia and France as its two most dangerous rivals. But as the 1900's began things changed. The biggest reasons for joining the Triple Entente were that: 1) France and Britain reached a number of agreements in 1904 about North African colonies 2) Japan defeated Russia in a war in 1904 which weakened Russia so Britain was much less worried about them 3) Britain was most worried about Germany. Kaiser Wilhelm II wanted to have a bigger empire and strong navy to rival Britain's own. ...read more.

Britain's answer to this was a new, more powerful warship named the HMS Dreadnaught. Germany quickly followed suit and between 1906-1914 a total of 46 Dreadnaughts were produced. 29 being Britain's and 17 made by Germany. This made countries even more worried! The final act that convinced everyone that Germany wanted war was the Schlieffen Plan. This was Germany's war arrangement. The plan was to attack and defeat France in 6 weeks, this was the estimated time for Russia to mobilise, and then turn their forces on Russia. They were confident this would work because they were convinced Russia would be slow to prepare and they had defeated France in this way before. Assassination in Sarajevo The Sarajevo Assassination was the "Spark that lit the bonfire" so to speak. In 1914 Archduke Franz Ferdinand was visiting Sarajevo in Bosnia. Although he was advised against the visit, he probably wanted to show he was not scared. But no-one knew that 6 teenage members of the Black Hand Terrorist group were there, ready to kill the Archduke. Each of them had a bomb and phial of cyanide. As the car roller through the street the first two lost their nerve and fled. But the third threw his bomb at the car then swallowed his poison and jumped into the river. ...read more.

New governments that had been set up regualy argued. Austria and Russia were both very eager to control the area. The First Chris happened in 1908 when Austria took the provinces of Bosnia and Herzegovina. Russia and Serbia both protested, buy backed down when Germany nade it clear to them that they supported Austria. Neither Russia nor Serbia were prepared to risk starting a war with Germany over the area of land. But now Austria felt very confident with their new, powerful ally germany and started to purposely make trouble with Austria and Russia. In 1912-1913 there were lots of small, local wars. Serbia emerged as the most powerful country in the Balkans. This was bad news for Austria as Serbia now had a strong army and was close friends with Russia. Austria decided Serbia needed to be destroyed and this opportunity came with the Asassination on Archduke Franz Ferdinand. To sum up I would say that if the alliance system was not in place the war would not have happened, or at least it wouldn't have been as wide spread. Austria would have attacked Serbia then Russia would have probably attacked Austria, Germany would possibly help Austria but neither Briatin nor France would have got involved. And over 2 Million troops wouldn't have died. ?? ?? ?? ?? ...read more.