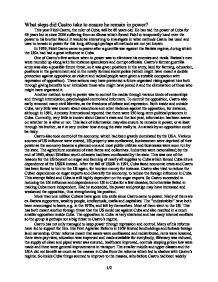 What steps did Castro take to ensure he remain in power?

What steps did Castro take to ensure he remain in power? This year Fidel Castro, the ruler of Cuba, will be 80 years old. He has had the power of Cuba for 48 years but is since 2006 suffering from an illness which forced Fidel to temporarily hand over the power to his brother Raoul. It would be interesting to investigate in what methods Castro has used and uses to remain in power for this long, although perhaps all methods are not yet known. In 1959, Fidel Castro came to power after a guerrilla war against the Batista regime, during which the USA had had a great influence in Cuba. One of Castro's first actions when in power was to eliminate his enemies and rivals. Batista's men were rounded up along with for instance speculators and corrupt officials. Castro's former guerrilla army was also a possible future threat, so it was given positions in the army, land for farming, education, positions in the government and in the newly formed secret police (which might have meant a double protection against opposition as violent and radical people were given a suitable occupation with repression of opposition). ...read more.

The opposition in Cuba is very shattered and has many internal conflicts so the group is perhaps not a big threat to Castro's regime. Castro has not only managed to keep power through repression and control. Many of his reforms have led to support for him. His First Agrarian Reform in 1959 limited landholdings and forbade foreign land ownership. Other reforms meant that assets were confiscated and redistributed, rents were lowered, there were pay rises, education was improved and made available for everybody, illiteracy was reduced, the supply of clean and piped water was ensured, healthcare improved, controls keeping prices low were made and there were general improvements in transport. The smaller middle and upper classes and the USA did not benefit as much as the masses in Cuba from the reforms which led to clashes with Castro's regime. So inside Cuba things seemed to improve to the masses, who before Castro had been widely neglected. Internationally, it seemed to many that the regime was honest and genuinely seeking the welfare of the people and the avoidance of corruption. The single party system, the economic stagnation and the US boycott of Cuba forced Cuba into a dependence of the USSR. ...read more.

Castro has also managed to keep a firm grip of the power by holding the top positions in the state himself and still having somebody to replace him, his brother Raoul. These things have possibly made it more difficult for an opposition against Castro. To gain further support, Castro has the last decade improved the situation for Catholics in Cuba and the international Cuban image by loosing restrictions on Catholics and reinstating Christmas Day, which had been abolished in 1969. Catholicism had for many decades been forbidden and churches had been closed. Abortion was in 1998 condemned by him in response to criticism by the Pope who visited Cuba that year. This may have increased support for Castro both within and outside Cuba and thereby protecting his power. As a conclusion it can be said that Fidel Castro has managed to remain in power mainly due to skilful elimination of enemies and rivals, control of the media, reforms improving the situation to the masses, economic reforms, the exiling of "undesirables", the conflicts with the USA, the alliance with USSR, foreign projects as the aiding of the Angolan opposition, his own image and his reforms improving conditions for Catholics. Sources Jack Watson, Success in World History Since 1945, John Murray, 1997 www.ne.se/jsp/search/printarticle.jsp?i_art_id=148447&i_sect_id=148439 www.ne.se/jsp/search/printarticle.jsp?i_art_id=141950&i_sect_id=141950 www.ne.se/jsp/search/printarticle.jsp?i_art_id=148447&i_sect_id=148467 ?? ?? ?? ?? 1/2 ...read more.