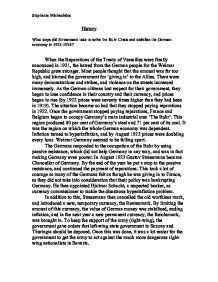 What steps did Stresemann take to solve the Ruhr Crisis and stabilise the German economy in 1923-1924?

History What steps did Stresemann take to solve the Ruhr Crisis and stabilise the German economy in 1923-1924? When the Reparations of the Treaty of Versailles were finally announced in 1921, the hatred from the German people for the Weimar Republic grew stronger. Most people thought that the amount was far too high, and blamed the government for 'giving in' to the Allies. There were many demonstrations and strikes, and violence on the streets increased immensely. As the German citizens lost respect for their government, they began to lose confidence in their country and their currency, and prices began to rise (by 1922 prices were seventy times higher than they had been in 1919). The situation became so bad that they stopped paying reparations in 1922. ...read more.

This took a lot of courage as many of the Germans felt as though he was giving in to France, as they did not take into consideration that their policy was bankrupting Germany. He then appointed Hjalmar Schacht, a respected banker, as currency commissioner to tackle the disastrous hyperinflation problem. In addition to this, Stresemann then cancelled the old worthless mark, and introduced a new, temporary currency, the Rentenmark. By limiting the amount of this currency, the value of German money was stabilised, ending inflation, and in the next year a new permanent currency, the Reichsmark, was brought in. To keep the support of the army (right-wing), the government gave orders that left-wing state government in Saxony and Thuringia should be deposed. ...read more.

The great advantage was that it provided a break from the huge payment previously expected, though it fixed no date for the end of payments, which made the plan unpopular with a certain amount of German people. With some reparations paid, the French and Belgians withdrew their troops from the Ruhr in 1925, and the government soon noticed a huge gain in there funds. Although Gustav Stresemann was only Chancellor for five months, he made a substantial difference and aid to the German economy. As well as helping Germany financially, he also helped the situation between Germany and her neighbours. As relations among Germany with France and Belgium improved, the Locarno Pact was soon initiated and the peace treaty was signed in October 1925, as a guarantee for the borders of the three counties. ?? ?? ?? ?? Stephanie Michaelides ...read more.