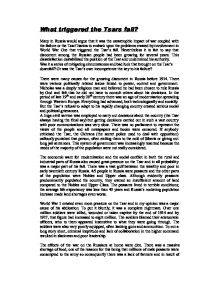 What triggered the Tsars fall?

What triggered the Tsars fall? Many in Russia would argue that it was the catastrophic impact of war coupled with the failure or the Tsar/Tsarina to embark upon the problems created by involvement in World War One that triggered the Tsar's fall. Nevertheless it is fair to say that discontent among the Russian people had been growing for several years. This dissatisfaction destabilized the position of the Tsar and undermined his authority. Was it a series of mitigating circumstances and bad luck that brought on the Tsar's downfall? Or was the Tsar's own incompetence the key to his failure? There were many causes for the growing discontent in Russia before 1914. There were various politically related issues linked to power, control and government. Nicholas was a deeply religious man and believed he had been chosen to rule Russia by God and felt that he did not have to consult others about his decisions. In the period of late 19th and early 20th century there was an age of modernisation spreading through Western Europe. Everything had advanced, both technologically and socially. But the Tsar's refusal to adapt to his rapidly changing country created serious social and political grievances. A huge civil service was employed to carry out decisions about the country (the Tsar always having the final say) ...read more.

There was a massive shortage of food; one of the reasons for this being that millions of male peasants were conscripted to the army so consequently there was a lack of farmers and in result of that, a lack of food. Secondly, the Russian railway system was being used to transport provisions to the war front and so there were fewer trains for food. To add to the insult, the lack of coal and fuel meant that citizens in the cities were cold as well as famished! After all this discontent gathering in Russia, the cities began to lose confidence in the government. In September 1915, Nicholas, already under a significant amount of pressure, increased the strain on himself when he decided to take over the running of the war and go to the war front himself. This was a terrible mistake and his decision had serious consequences; being in charge of the war meant that he was blamed for all of the defeats! As Nicholas now spent most of his time at GHQ, (the military headquarters) he handed the responsibility for the domestic policy and the running of the country over to his wife, the Tsarina (Alexandra Fyodorovna). ...read more.

Rasputin was merely a symptom, not a cause. Personally I believe that the Tsar himself was the chief cause of his own fall. First of all, he hardly knew his country at all. There were countless demands for change within Russia but he disregarded them and often tried to crush anybody valiant enough to stand up. He owned one sixth of the world and hardly knew anything about the people in it! Perhaps if he had found out what his people sought after, then the pressure may have decreased. You would have thought that already being under a great deal of strain, Nicholas would be intelligent enough not to take over the management of the war. But possibly, if he didn't know his country then maybe he didn't realise how poorly equipped the soldiers were and how half of the army was made up of peasants since the professionals had already been wiped out! So then there was the issue that being in command predestined that he was held liable for all of Russia's defeats, thus creating even more pressure for himself. Well, I'm astounded he didn't explode with all that anxiety hanging over him. There is no doubt that Nicholas was a well-meaning person and devoted to his family, but in all sincerity, a duck would have probably done a better job. ...read more.