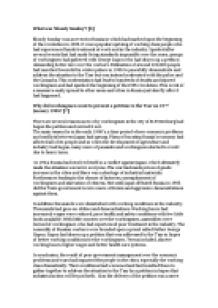 What was bloody Sunday? Did the Czar learn from the 1905 Revolution?

﻿What was ?bloody Sunday?? [5] Bloody Sunday was an event in Russia in which had marked upon the beginning of the revolution in 1905. It was a popular uprising of working class people who had experienced harsh treatment at work and in the industry. Sparked after several events that had made living standards impossible over the years, groups of workingmen had gathered with George Gapon who had drawn up a petition demanding better care over the workers. Estimation of around 200,000 people had marched towards the winter palace in 1905 to peacefully demonstrate and address the situation to the Tsar but was instead confronted with the police and the Cossacks. This confrontation had lead to hundreds of deaths and injured workingmen and had sparked the beginning of the1905 revolution. This event of a massacre easily spread to other areas and cities in Russia just shortly after it had happened. Why did workingmen want to present a petition to the Tsar on 22nd January 1905? [7] There are several reasons as to why workingmen in the city of St.Petersburg had begun the petition and carried it out. ...read more.

The Assembly of Russian workers were founded upon a priest called Father George Gapon. Gapon had drawn up a petition that was addressed to the Tsar in hopes of better working conditions for the workingmen. Terms included, shorter working hours, higher wages and better health care systems. In conclusion, the result of poor government management over the economic problems and wars had impacted the people in the cities, especially the working class dramatically. Their conditions had worsened and had resulted them to gather together to address the situation to the Tsar by a petition in hopes that industrial action will be put forth. Also the delivery of the petition was a mere statement to show the Tsar how greatly of an impact it has affected them and that industrial action must be put forth immediately. ?The Tsar learned nothing and the people gained nothing from the 1905 revolution?. Do you agree? Explain your answer. To an extent I do not agree with this statement that the tsar learnt nothing as well as the people. ...read more.

In 1905, the revolution was not organized, it was just popular and so it made it very uncoordinated and ineffective. People also gained experience out of the situation. They were able to improve their strategy and build a stronger force. In 1914, physical protests were common after Stoylpin addressed the reforms and demonstrations were bigger than ever. In 1917, when the second revolution broke out and had succeeded, it does effectively show that people gained knowledge out of their first attempt. They learnt how to manage and scheme plans in order to succeed by the method of force. In a different sense, some people gained more profits out of the incident in 1905. 15% of the peasants in the countryside had found more wealth as they were introduced with the new reforms of making agriculture more efficient as they were looking towards the Tsars vision. This in a different view tells us that they learnt how to improve living standards. However, there are pointers that suggest that they didn?t learn and gain anything out of the 1905 revolution. The Tsar afterall, didn?t succeed in controlling the second ...read more.