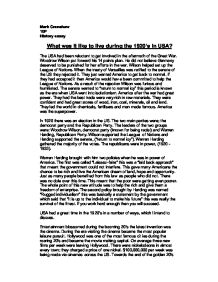 Mark Cranshaw 10P History essay What was it like to live during the 1920's in USA? The USA had been reluctant to get involved in the aftermath of the Great War. Woodrow Wilson put forward his 14 points plan. He did not believe Germany deserved to be punished for her efforts in the war. Wilson helped set up the League of Nations. When the treaty of Versailles was ratified to the senate of the US they rejected it. They just wanted America to get back to normal. If they had accepted it then America would have been committed to help the League of Nations. As a result of the rejection Wilson was furious and humiliated. The senate wanted to "return to normal icy" this period is known as the era when USA went into isolationism. America after the war had great power. They had the best trade were very rich in raw materials. They were confident and had great stores of wood, iron, coal, minerals, oil and land. They led the world in chemicals, fertilisers and man made famous. America was the superpower. In 1920 there was an election in the US. The two main parties were; the democrat party and the Republican Party. The leaders of the two groups were: Woodrow Wilson, democrat party (known for being racist) and Warren Harding, Republican Party. Wilson supported the League of Nations and Harding supported the senate, ("return to normal icy"). ...read more.

Americas aim was to have "a car in every garage and a chicken in every pot". Women during the roaring 20's were different than before. They were liberated. They got new employment. For example there were many nurses and some women worked in chemical plants. The women of this era gained the right to vote for the first time. Women were allowed to drive cars, make up and for the first time contraceptive advice was given to them. Women became more educated, they were no longer considered to be less intelligent. Women's magazines soared. Women had a new fashion "the flapper" they took the look of men and for the first time women could smoke in public. Cheap fashions became available. During the 1920's there was a massive growth in sport. Baseball, American football and boxing were among the most popular sports. Babe Ruth was the base baler of this era and is still regarded as one of the greatest base balers of all time. He played for the New York Yankees and was the best hitter in the game. The Yankee stadium is known as the "house that Ruth built" this is because of the money that he brought to the club. Babe Ruth played 2,503 games, achieved 2,174 runs and had an average of 714 home runs. The most famous fight of the 20's was between Jack Dempsey and Gene Tunney. 145,000 people witnessed the fight that Gene Tunney won. ...read more.

He did not except bribes, but was forced to leave his job by his brother. Al Capone did not wish to kill him but just to stop him from working with his enemy, the law. There were two groups who helped to introduce prohibition; anti-Christian union and the anti-saloon league. They wanted alcoholic consumption banned. They used lots of propaganda to convince people that alcohol was bad. They used German beer advertisements. They said that people who drank German beer were un patriotic. They said that families were getting poorer because of the father of the family drinking away all the money at night. In some cases this was true. Alcoholic beverages were made legal via the health service. As a result of this 95% of people wanted alcohol from the health service. The alcoholic death cases went up from 1,064 in 1920 to 4,154 in 1926 despite the introduction of prohibition. Prohibition was a disaster. To live during the 1920's would have been fun and exciting. There were many new things and inventions. Most people had lots of fun and it seemed that everyone was progressing and getting richer. There were many people having amazing times but there were just as many who were not. Lots of people lost jobs, industries became derelict and declined away. For the black people it was no fun as the Ku Klux Klan terrorized them. During this period there were some vast improvement on many stages. I think that despite a lot of poverty and prohibition etc, the 1920's would have been an enjoyable and exciting period to live through. ...read more.