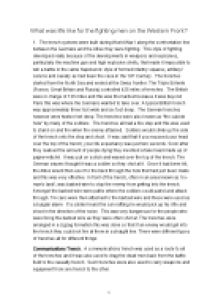 What was life like for fighting men on the Western Front?

ï»¿What was life like for the fighting men on the Western Front? 1. The trench systems were built during World War I along the confrontation line between the Germans and the Allies they were fighting. This style of fighting developed really because of the developments in weapons and explosives, particularly the machine gun and high explosive shells, that made it impossible to win a battle in the same Napoleonic style of formed infantry squares, artillery/canons and cavalry as had been the case in the 19th Century. The trenches started from the North Sea and ended at the Swiss frontier. The Triple Entente (France, Great Britain and Russia) controlled 425 miles of trenches. The British were in charge of 125 miles and this was the hardest because it was beyond Paris this was where the Germans wanted to take over. A typical British trench was approximately three foot wide and six foot deep. The German trenches however were twelve feet deep. The trenches were also known as “the suicide hole” by many of the soldiers. The trenches all had a fire step and this was used to stand on and fire when the enemy attacked. Soldiers would climb up the side of the trench onto the step and shoot. It was said that if you exposed your head over the top of the trench, your life expectancy was just two seconds. Soon after they realised the amount of people dying they invented a fake head made up of papier-mâché. It was put on a stick and waved over the top of the trench. The German snipers thought it was a soldier so they shot at it. ...read more.

Another grenade which the British used was the Egg Grenade and this was a smaller grenade in the shape of an egg. Rifle. The rifle was the most used weapon in World War I and probably one of the most effective. The rifle was used by both sides. It was called the bolt action rifle and could fire 15 rounds per minute and would reach an enemy 1400 meters away. The accuracy was around 600 meters. The gun was said to be very reliable and sturdy, with the bolt meter placed on the right hand side of the weapon. The gun would be loaded by being pulled upwards and then pointed at 90 degrees. The soldier would fire and bang the enemies were dead. Machine Gun. The machine gun was by far the most effective weapon used in World War I. There were many techniques used by both sides. The Germans used enfilade fire and this allowed them to fire along a line of allied soldiers killing the maximum number in the weapon?s ?beaten zone?. Their guns could fire 400-600 small-calibre rounds per minute. The gun would be fed by a metal strip of bullets. The guns were very heavy, reaching 40-60kg. This became a bit of a pain when it came to moving them. Gas. Gas was used in World War I first by the Germans. The Germans used chlorine gas. The English felt very intimidated by this. It caused them to have a burning sensation in the throat and caused major chest pains. The only flaw in the gas was that the weather had to be perfect to use the weapon. ...read more.

5. The discomforts of trench life were the limited amount of space, the intense cold in winter, the wet and sucking mud, a lack of food, the presence of infection and disease everywhere and the constant noise and threat from the raging fighting. All these things caused a lot of stress and often soldiers were unable to perform as well as they could. It was during World War I that shell shock began to be a problem with soldiers. Some soldiers were so stressed by the noise and prospect of war that they were unable to fight at all. Many were shot as deserters and it was not until very recently that Britain pardoned them for what we now know was a psychological illness. 6. Soldiers passed their time in and out of the trenches in many ways. In the trenches, they played cards, cleaned their weapons, told stories about their loved ones back home, sang songs, played musical instruments and of course went on patrol and sentry duty during the time between the big battles. They also wrote letters and poetry to send home and this gives us much of what we now know about the war and a lot of famous poetry. Soldiers shared cigarettes, swapped buttons, cleaned their uniform, buried bodies and invented all sorts of ways to pass the time and boredom in the trenches. Out of the trenches the soldiers played sport, visited the local villages in search of girls and alcohol and a few were able to go back on Rest and Recuperation (known as R & R) to England. On at least one occasion, believed to be on Christmas Day, the British soldiers played football against German soldiers in no-mans land. A typical trench with a soldier on a fire step Trench foot A good rat hunt ...read more.