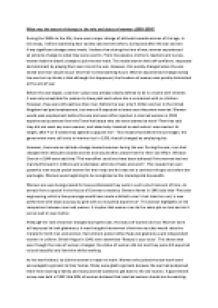 ﻿What was the extent of change in the role and status of women c1939-1950? During the 1940s to the 50s, there was a major change of attitude towards women of this age. In this essay, I will be examining how society saw women before, during and after the war and see if any significant changes were made. I believe that during the time of war, women experienced an extreme change to what they were used to. From housewives, mothers, teachers and nurses, women had the drastic change to join the war work. This made women feel self-confident, respected and dominant by playing their own role in the war. However, this quickly changed when the war ended and men would be put into their normal working hours. Women experienced change during the war but my thesis is that although this happened, the freedom of women was quickly diminished at the end of war. ...read more.

Winston Church in 1944 even said that ?This war effort could not have been achieved if the women had not marched forward in millions and undertaken all kinds of tasks and work?. This reveals that even powerful men would praise women for their help and this was not a common thing to do before the war began. Women were beginning to be recognized as the stereotypical housewife. Women are even being praised for how professional they work in such a short amount of time. An extract from a speech in the House of Commons made by Clement Attlee in 1942 said that ?Precision engineering, which a few years ago would have made a skilled turner?s hair stand on end, is now performed with dead accuracy by girls with no industrial experience?. This extract highlights on the comparison between men and women. It implies that women can do the same job as man and do it just as well or even better. ...read more.

It was an awful and wonderful war”. This implies that women wished that they could have stayed in their employment longer and that they thoroughly enjoyed the work they did for the war. I believe that there was change for women during the war but that change did not last. I believe that not a lot of change happened because women’s work and freedom only lasted as long as the war did. After the war, the media still portrayed women as the traditional domestic housewife. Women had to go back to their routines pre-war. Women’s pay was still less than men’s because the Equal Pay Commission, set up in 1944, said in 1946 “an average for a man’s weekly wages is £5.70 and a women’s is £3”. This reveals that even when women proved that they can do a man’s job just as well, men are still seen as the ‘main bread winner’. These are the main reasons why I believe there was not a lot of change for women after the war. ...read more.