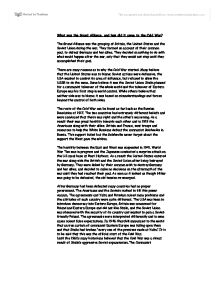 What was the Grand Alliance, and how did it come to the Cold War?

What was the Grand Alliance, and how did it come to the Cold War?

The Grand Alliance was the grouping of Britain, the United States and the Soviet Union during the war. They formed on account of their common goal, to defeat Germany and her allies. They decided on nothing to do with what would happen after the war, only that they would not stop until they accomplished their goal.

There are many reasons as to why the Cold War started. Many believe that the United States was to blame; Soviet actions were defensive, the USA wanted to control its area of influence, but refused to allow the USSR to do the same. Some believe it was the Soviet Union; Stalin planned for a communist takeover of the whole world and the takeover of Eastern Europe was his first step in world control. While others believe that neither side was to blame; it was based on misunderstandings and forces beyond the control of both sides.

The roots of the Cold War can be found as far back as the Russian Revolution of 1917. The two countries had extremely different beliefs and were convinced that theirs was right and the other’s was wrong. As a result their was great hostility towards each other and in 1919 the Americans along with their allies; Britain and France, sent troops and resources to help the White Russians defeat the communist Bolsheviks in Russia. This support failed but the Bolsheviks never forgot about the support the West gave the whites.

The hostility between the East and West was suspended in 1941. World War Two was in progress and the Japanese conducted a surprise attack on the US naval base at Pearl Harbour. As a result the United States entered the war along side the British and the Soviet Union after being betrayed by Germany. They were linked by their common wish to destroy Germany and her allies, and decided to make no decisions on the aftermath of the war until they had reached their goal. As soon as it looked as though Hitler was going to be defeated, the old tension re-emerged.

After Germany had been defeated many countries had no proper government. The Americans and the Soviets rushed to fill this power vacuum. The agreements and Yalta and Potsdam raised many problems and the attitudes of each country were quite different. The USA was keen to introduce democracy into Eastern Europe, Britain was concerned for Poland and Eastern Europe and did not like Stalin, and the Soviet Union was obsessed with the security of its country and wanted to gain a Soviet-friendly Poland. The agreements were interpreted differently and in some cases raised false expectations. In 1946 Churchill announced to the world that an iron curtain of communist Eastern Europe was falling upon them and that Stalin had broken “every one of the promises made at Yalta”. It is to be said that this was the official start of the Cold War.

Until the 1960s many historians believed that the Cold War was a direct result of Stalin’s aggressive Soviet expansionism. The Communist

Manifesto was based on the idea that there would be a violent world revolution. After WWII had a huge army that could be used to implement this world revolution. This fact was outlined in George Keenan’s long telegram in 1946. Many people of the West believed that the American’s reaction was defensive, due to the military expansionism of Stalin and his successors. This sort of thinking, along with the fact that free and fair elections weren’t being held in Eastern Europe and the salami tactics (divide and conquer process of threats and alliances to overcome opposition) used to take over these countries encouraged people to blame the Soviet Union. These attitudes provided the US with a useful justification for implementing the Truman Doctrine and the Marshall Plan.

The main problem with this traditional school of thought is that it fails to take into account the fact that Stalin needed a buffer zone to defend the Soviet Union from future Western aggression. By the 1960s many came to question America’s innocence and blamed the Cold War on the US economic imperialism or untrustworthy behaviour during WWII. Revisionists criticized Kennan’s idea that Stalin was a mad man who wanted world domination. During the war Stalin was suspicious of the USA because they had not opened a second front until 1944 by which time the Soviet Union was nearly destroyed. The USA was now in a position to put the final nail in the coffin. Revolutionists also suggest that the USA wanted to control all of Europe (even the USSR) to gain access to new markets for US goods. Other historians also believe the Americans were to blame for their use of the atomic bomb. Its dropping on Japan was a statement of power as a means to imitate the Soviet Union.

In the mid 1970s historians began to avoid blaming either side for the Cold War. Instead these post revolutionists focus on misinterpretations, mutual reactivity and shared responsibility. It is believed that both sides only intended to preserve peace, give people the opportunity to govern themselves and security for all, but led to increased hostility.

US Senator McCarthy made a public accusation that that more than 200 card carrying communists had infiltrated the US government. In fact, even Stalin used the threat of a Western invasion in a similar way to oppress the people under his control. These accusations were proven to be untrue, however they significantly changed people’s way of thinking. This proves that in this case both the United States and the Soviet Union played a part in encouraging the Cold War.

I believe in relations to the post revolutionists, that the US misinterpreted Stalin’s need for security after WWII and saw it as a move toward world domination. Similarity the Soviets mistakenly perceived a change in American policy when Truman started talking tough. The two leaders were suspicious of each other an in response made defensive actions.