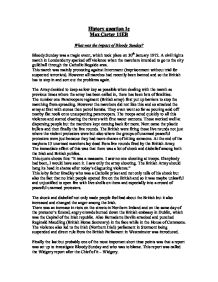 What was the impact of Bloody Sunday?

History question 1c Max Carter 11EB What was the impact of Bloody Sunday? Bloody Sunday was a tragic event, which took place on 30th January 1972. A civil rights march in Londonderry sparked off violence when the marchers intended to go to the city guildhall through the Catholic Bogside area. This march was mainly protesting against Internment (imprisonment without trial for suspected terrorists). However all marches had recently been banned and so the British has to step in and sort out the problems again. The Army decided to keep as low key as possible when dealing with the march as previous times where the army has been called in, there has been lots of fatalities. The number one Paratroopers regiment (British army) first put up barriers to stop the marching from spreading. However the marchers did not like this and so attacked the army at first with stones then petrol bombs. They even went so far as pouring acid off nearby flat roofs onto unsuspecting paratroopers. The troops acted quickly to all this violence and started clearing the rioters with first water cannons. These worked well at dispersing people but the marchers kept coming back for more. Next came the plastic bullets and then finally the live rounds. ...read more.

This report was called the Widgery report after the Chief of it - Widgery. Max Carter 11EB It excused the British Army and said those to blame were the dead rebels for causing all the trouble. This report was ordered by the British Government and so lots of the public thought it to be biased. This is what the report said: "There was no general breakdown in Army discipline...soldiers who identified armed gunmen fired upon them in accordance with the standing orders in the yellow card. Each soldier was his own judge of whether he had identified a gunman...at one end of the scale, some soldiers showed a high degree of responsibility, at the other...firing bordered on the reckless." This is just basically saying that it was not the British at fault but instead the people who were shot. Some people believed that as it was the British Government writing this report then it was likely to be biased, after the report was released many minds were still convinced of its bias towards the British. I personally think that what the report had to say was wrong as the soldiers fired at large groups of people, in which case these could have been innocent civilians. ...read more.

This is for all the things that the government did like the Widgery report, but mainly the mistrust of the British intentions. Max Carter 11EB In conclusion I believe that Bloody Sunday played and had a very large impact on the history of Ireland. I think this because some of the things I have mentioned in my answer are still ongoing today after almost fifty years. The main ongoing impact that a lot of Irish people have very strong feelings about is the strong hatred for the British Government. Lots of people have thoughts on this because it was the British government's terrible actions forty years ago that helped to shape Ireland and make it how it is today where still violence is present and the Catholics and Protestants don't get on. I think the shock and disbelief on the short term point side is completely justified as in my opinion it was not right at all that the British opened fire with live rounds on unarmed civilians, some of which were protesting and some of which were completely innocent and were just caught in crossfire. I think that it was acceptable to fire Rubber bullets and water cannons as they were doing a pretty good job dispersing rioters so why use the proper guns and kill lots of people when they can moved on without any fatalities. ...read more.