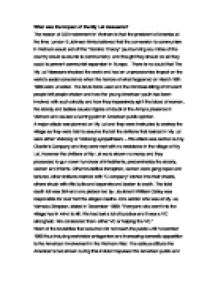 What was the impact of the My Lai massacre?

What was the impact of the My Lai massacre? The reason of US involvement in Vietnam is that the president of America at the time Lyndon B.Johnson firmly believed that the conversion to communism in Vietnam would set off the "Domino Theory" (surrounding countries of the country would succumb to communism) and thought they should do all they could to prevent communist expansion in Europe. There is no doubt that The My Lai Massacre shocked the world and had an unprecedented impact on the world's social conscience when the horrors of what happened on March 16th 1968 were unveiled. The brute force used and the mindless killing of innocent people left people shaken and how the young American youth had been involved with such atrocity and how they impassively spilt the blood of women, the elderly and babies caused ripples of doubt of the Army's presence in Vietnam and caused a turning point in American public opinion. A major attack was planned on My Lai and they were instructed to destroy the village as they were told to assume that all the civilians that resided in My Lai were either Vietcong or Vietcong sympathisers - this attack was carried out by Charlie's Company and they were met with no resistance in the village of My Lai. However the civilians of My Lai were shown no mercy and they proceeded to gun down hundreds of inhabitants, predominately the elderly, women and infants. ...read more.

(Spartacus). In 1967 - again before the My Lai incident, Vietnam Veterans against the War was formed and they demonstrated all over America. People watched on television as Vietnam heroes threw away the medals they had won fighting in the war. One shouted: "Here are my merit badges for murder." Another apologized to the Vietnamese people and claimed that: "I hope that someday I can return to Vietnam and help to rebuild that country we tore apart." (Spartacus) One soldier, Keith Franklin, wrote a letter that was only to be opened on his death. He was killed on May 12, 1970: "If you are reading this letter, you will never see me again, the reason being that if you are reading this I have died. The question is whether or not my death has been in vain. The answer is yes. The war that has taken my life and many thousands before me is immoral, unlawful and an atrocity... I had no choice as to my fate. It was predetermined by the war-mongering hypocrites in Washington. As I lie dead, please grant my last request. Help me inform the American people, the silent majority who have not yet voiced their opinions." (Spartacus) A popular song that ridiculed American president at the time "Hey! Hey! LBJ, How many kids did you kill today? ...read more.

In conclusion it could be voiced that although My Lai shocked many in its repercussions and triggered anti-war activism, the outcome would still have been inevitable even if it had not occurred as support for the war was rapidly decreasing and morale was low. The American public however, doubted the US army's cause more though after the horrific facts seeped out in 1969 - it is clear why they tried to cover this up, it did them no favours back at home, as before this people were already doubting why their soldiers were at Vietnam though the vast majority of the American public had supported it in the beginning. Although they showed signs of military success - they had not won over the American public so they had lost at home in a sense. The US army was hugely criticized by the media and anti-war activism in America increased - The My Lai incident played some part in this. American tactics also played a part in the eventual withdrawal of American troops - because there was no way of telling who was Vietcong and who was innocent, the Americans proceeded to commit mass murder of both VC and innocent civilians which gave them a false impression on how successful they were at killing the Vietcong. The fact that it was a guerrilla war did not help - they had no idea of telling where the enemy was and were unfamiliar with their surroundings. By Eva Mathew ...read more.