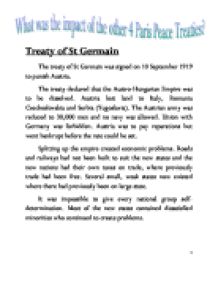 What was the impact of the other 4 Paris Peace Treaties?

Treaty of St Germain The treaty of St Germain was signed on 10 September 1919 to punish Austria. The treaty declared that the Austro-Hungarian Empire was to be dissolved. Austria lost land to Italy, Romania Czechoslovakia and Serbia (Yugoslavia). The Austrian army was reduced to 30,000 men and no navy was allowed. Union with Germany was forbidden. Austria was to pay reparations but went bankrupt before the rate could be set. Splitting up the empire created economic problems. Roads and railways had not been built to suit the new states and the new nations had their own taxes on trade, where previously trade had been free. ...read more.

in reparations. Fear of German resentments over the loss of lands led them to be occupied by the Nazis in WW2. Treaty of Trianon The Treaty of Trianon was signed on 4 June 1920 to punish Hungary. Hungary was allowed 35,000 soldiers and three patrol boats. It had to pay 200 million gold crowns. Hungary agreed to pay reparations, but the collapse of Hungary's economy in the early 1920s meant nothing was ever paid. The Austria-Hungarian Empire was dismantled. Land was given to Yugoslavia, Romania and Czechoslovakia. A communist state under Bela Kun was established in 1919. He was overthrown later in the year and a military dictatorship was set up under Admiral Horthy. ...read more.

An independent Armenian State was to be created. The Allies could keep troops in Turkey to ensure the treaty was obeyed. The Turks were so outraged by the terms of the Treat of S�vres that the Sultan's government was overthrown in an uprising. Italy gained land and Britain and France were allocated mandates. The Turks rebelled the treaty and there was an uprising led by Mustapha Kemal. Rather than fighting Kemal, the Allies agreed to amend the Treaty of S�vres. This led to the signing of the Treat of Lausanne in July 1923. In the Treaty of Lausanne Turkey recovered Smyrna and Eastern Thrace from Greece. All foreign troops left Turkey. Turkey regained control over the Straits. No limits were placed on Turkey's armed forces. Sayan Dutta Chowdhury 9C ?? ?? ?? ?? 1 ...read more.