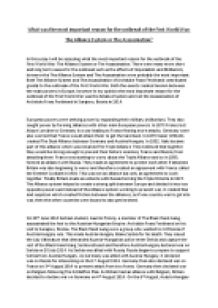 What was the most important reason for the outbreak of the First World War: The Alliance System or The Assassination?

Finally Britain made an entente with Russia forming the Triple Entente in 1907. The Alliance system helped to create a strong split between Europe and divided it into two opposite powers and instead of the Alliance system working to prevent war, it created fear and suspicion which created friction between the alliances, as if one country was to get into war, then the other countries were bound to also get involved. On 28th June 1914 Serbian student, Gavrilo Princip, a member of The Black Hand Gang, assassinated the heir to the Austrian-Hungarian Empire: Archduke Franz Ferdinand on his visit to Sarajevo, Bosnia. The Black Hand Gang were a group who wanted to rid Bosnia of Austria-Hungary rule. This made Austria-Hungary blame Serbia for his death. They issued the July Ultimatum that demanded Austria?Hungarian police enter Serbia and capture the rest of the Black Hand Gang. ...read more.

This is the same for Austria-Hungary who was closely allied with Germany. Without the Alliance System, not as many countries would have been involved and dragged them all into war. In conclusion, the Alliance System was a long term cause, and the Assassination a short term cause. They both had serious ramifications for the outbreak of the First World War; however in my opinion the most important reason for the outbreak of the First World War in 1914 was the Alliance System. This is because in my opinion the long term effects of the Alliance System and the tension it created between the main European powers far outweigh the ramifications of the Assassination which would not have caused so much friction between the European Countries without the Alliance System. The formation of alliances seemed as huge threats which created the tension and friction needed to spark a war in the first place. ...read more.