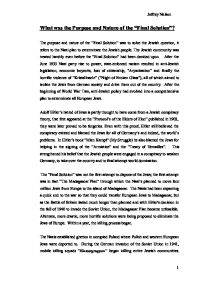 What was the Purpose and Nature of the Final Solution?

What was the Purpose and Nature of the "Final Solution"? The purpose and nature of the "Final Solution" was to solve the Jewish question, it refers to the Nazi plan to exterminate the Jewish people. The Jewish community was treated harshly even before the "Final Solution" had been decided upon. After the June 1933 Nazi party rise to power, state-enforced racism resulted in anti-Jewish legislation, economic boycotts, loss of citizenship, "Aryanization" and finally the horrific violence of "Kristallnacht" ("Night of Broken Glass"), all of which aimed to isolate the Jews from German society and drive them out of the country. After the beginning of World War Two, anti-Jewish policy had evolved into a comprehensive plan to exterminate all European Jews. Adolf Hitler's hatred of Jews is partly thought to have come from a Jewish conspiracy theory, that first appeared at the "Protocol's of the Elders of Zion" published in 1903, they were later proved to be forgeries. Even with this proof, Hitler still believed the conspiracy existed and blamed the Jews for all of Germany's and indeed, the world's problems. In Hitler's book "Mien Kampf" (My Struggle) he also blamed the Jews for helping in the signing of the "Armistice" and the "Treaty of Versailles". This strengthened his belief that the Jewish people were engaged in a conspiracy to weaken Germany, to take over the country and to final attempt world domination. The "Final Solution" was not the first attempt to dispose of the Jews; the first attempt was in fact "The Madagascar Plan" through which the Nazi's planned to move four million Jews from Europe to the island of Madagascar. The Nazis had been expecting a quick end to the war so that they could transfer European Jews to Madagascar, but as the Battle of Britain lasted much longer than planned and with Hitler's decision in the fall of 1940 to invade the Soviet Union, the Madagascar Plan became unfeasible. ...read more.

Regardless of whether or not they listened to broadcasts declaring the Nazis' exploits, the allied planes still dropped leaflets relaying information on annihilation policy, with warnings of the consequences of these atrocities- people must surely have taken notice of this. It is confirmed in SS reports and other sources that people did read and discussed the leaflets, but then again, the German people could have seen the leaflets as propaganda from their enemies, trying to turn them against each other. This source does not give enough evidence to prove whether or not the German people heard the radio broadcasts or what they actually thought about the leaflets, so most of this is speculation. How reliable is source 4 as evidence of what the German people knew about the "Final Solution"? Source four is an extract from a pamphlet issued illegally by Hans Scholl in 1943, he was a student that served as a medical orderly on the eastern front and was aware of the atrocities carried out on the Jews and Russians. Scholl was a member of the "White Rose", an anti-Nazi resistance movement. He assumes that all the German people knew about these terrible atrocities and blames them for not acting, but still, not everyone was privy to the information he was. After all, he served on the Eastern Front at Russia so he saw these atrocities with his own eyes. He doesn't take into account that anyone that did know, or had an idea of what was happening may have been too afraid to come forward for fear Nazi punishment for disloyalty. Hans Scholl's accusations against the German people could be bias as he was so angry that nothing was done to prevent the Nazis. This source cannot be considered as concretely reliable as it is from the point of view of an individual whose senses are clouded by anger and disappointed in his country. ...read more.

She was by no means a willing executioner as she wanted to help save the Jews from their horrible fate, this is highly admirable. She is an exceptional and active person, but comparing the abilities of the Germans with such a figure would be unfair as not everyone is inherently exceptional. Source eight is a very biased and emotional opinion, categorising all the German people under one sentiment. It cannot be proven how many of the German people were for or against Hitler's plan for the Jews. It would be wrong to blame them all, and it would be wrong to say that all the German people knew what was happening to the Jews. Source eight mentions the opinion of the Germans that were on the Nazis' side but doesn't mention any of the German people that were opposed to the terrible treatment of the Jewish community, source seven proves that there were those trying to help the Jews. In my opinion it would be, invalid to support one claim over another as every individual is different, some Germans may have been pro Nazi, some may have been indifferent and some may have been sympathetic to the Jewish people but were too afraid to come forward to help. Regardless, what we must bear in mind is the fact that the "Final Solution" was one enacted by Hitler and his Nazis, not the German people. It is unfair to stigmatise an entire country with blame for the actions of one group. Whether one was aware of Hitler's actions it would be unjust to label them "a willing executioner"- many factors contribute to a person's actions or inactions and these must be considered, as we have done. We can deduct that a number of the population were truly unaware of the atrocities inflicted upon the Jews, we can also assume that there did exist an amount who delighted in the Nazis' crimes, but for the remainder who may have been aware but turned a blind eye, we can, to an extent, forgive them for simply trying to get on with life. Jeffrey Nelson 1 ...read more.