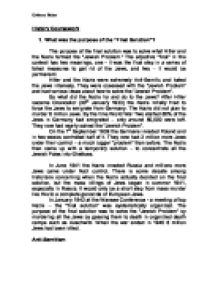 &quot;What was the purpose of the Final Solution?&quot;

History Coursework 1. What was the purpose of the "Final Solution"? The purpose of the final solution was to solve what Hitler and the Nazis termed the "Jewish Problem." The adjective "final" in this context has two meanings, one - it was the final step in a series of failed measures to get rid of the Jews, and two - it would be permanent. Hitler and the Nazis were extremely Anti-Semitic and hated the Jews intensely. They were obsessed with the "Jewish Problem" and had various ideas about how to solve the "Jewish Problem". So what did the Nazis try and do to the Jews? After Hitler became Chancellor (30th January 1933) the Nazis initially tried to force the Jews to emigrate from Germany. The Nazis did not plan to murder 6 million Jews. By the time World War Two started 80% of the Jews in Germany had emigrated - only around 80,000 were left. They now had nearly solved the "Jewish Problem". On the 1st September 1939 the Germans invaded Poland and in two weeks controlled half of it. They now had 2 million more Jews under their control - a much bigger "problem" than before. The Nazis then came up with a temporary solution - to concentrate all the Jewish Poles into Ghettoes. In June 1941 the Nazis invaded Russia and millions more Jews came under Nazi control. ...read more.

These laws defined a Jew; however they were muddled and illogical. A Jew was defined as someone who had one or more Jewish parents, two or more Jewish grandparents, or who engaged in Jewish religious practices. It was also possible to be classed as a Jew through marriage to a Jew or to someone with 3 or more Jewish grandparents. However, this was eventually dropped due to public pressure. The first Nuremburg Law defined Reich citizenship as being only able to be held by a "national of German or kindred blood", a definition the Jews were excluded from. Jews no longer held the right to vote or a fair trial. The second major Nuremburg Law, "For the Protection of German Blood and German Honour", banned marriage and sexual relations between Jews and Germans. There was no clear definition of a Jew either in genetic or religious terms, but Jews were officially made second class citizens by these laws in Nazi Germany. The Growth of Radical Anti-Semitism Open persecution of the Jews began to become more widespread in Nazi Germany between 1937 and 1939, as Jews were driven out of certain towns, which then declared themselves to be Judenfrei "Jew free" or Judenrein "Jew Pure". The Jews were banned from public swimming pools, restaurants, sports grounds, caf�s and theatres. However the ostracizing of Jews from German society did not provoke public anger or even disapproval. ...read more.

Conclusion The Final Solution, genocide of the European Jewry, was the last in a series of stages; encouraging emigration, ghettoes, shooting and finally the gas chambers. This was meant to be permanent. At first Hitler and the Nazis had been content with forcing Jews to leave Germany. They had not yet conceived the idea of murdering all the Jews. By 1939, 80% of the Jews had emigrated. On the outbreak of war on the 1st September 1939 and the capture of Poland, 2 million more Jews came under Nazi control. the possibilities for solving this "problem" considered were numerous. One of Hitler's ideas was to deport the Jews to Madagascar, and to use them as slave labour, before the Nazis decided on genocide. By the summer of 1941 a decision had been taken at Auschwitz to kill the Jews who could not work and to work the ones who could until they died. During Operation Barbarossa in 1941, the Einzattgruppen came behind the front lines and murdered Jews by shooting them. Finally the final solution was systematically organized at the Wansee Conference in 1942. So the purpose of the final solution was solve what the Nazis termed the "Jewish Problem" by genocide of the Jews - killing those who could not work straight away and then working the others to death as slaves. The end result was that by the end of the Second World War 6 million Jews had been killed. ?? ?? ?? ?? Gr�inne Baker ...read more.