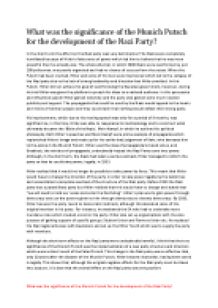 What was the significance of the Munich Putsch for the development of the Nazi Party?

﻿What was the significance of the Munich Putsch for the development of the Nazi Party? In the short term the effect on the Nazi party was very detrimental. The Nazis were completely humiliated because of Hitler?s false sense of power which led him to believe that he was more powerful than he actually was. The whole attempt, in which 3000 Nazis were overthrown by just 100 policemen, was poorly organised and had no chance of success from the outset. When the Putsch had been crushed, Hitler and some of his men were imprisoned which led to the collapse of the Nazi party due to the lack of strong leadership and direction that Hitler provided. ...read more.

Both Hitler?s speeches and Mein Kampf were prime example of propaganda which replenished Hitler?s image and made up for his earlier bad judgement of Kahr, who betrayed him to the police in the Munich Putsch. Hitler used the idea of propaganda to boost votes, and Goebbels, the minister of propaganda, undoubtedly helped the Nazi Party come into power. Although, in the short term, the Nazis had taken a serious setback, Hitler managed to reform the party so that he could take power, legally, in 1933. Hitler realised that it would no longer be possible to take power by force. This meant that Hitler would have to change the direction of the party in order to take power legally by the ballot box and necessitated a complete overhaul of the structure of the Nazi party. ...read more.