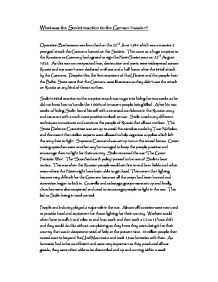 What was the Soviet reaction to German invasion?

What was the Soviet reaction to the German invasion? Operation Barbarossa was launched on the 22nd June 1941 which was a massive 3 pronged attack the Germans formed on the Soviets. This came as a huge surprise to the Russians as Germany had agreed to sign the Nazi-Soviet pact on 23rd August 1939. As this was so unexpected fear, destruction and panic were widespread across Russia and war wasn't even declared until one and a half hours after the initial attack by the Germans. Despite this, the first reactions of the Ukraine and the people from the Baltic State were that the Germans were liberators so they didn't see the attack on Russia as any kind of threat to them. ...read more.

Great moving speeches were another way he managed to keep the people positive and encourage them to fight for their country. Stalin renamed the war 'The Great Patriotic War'. The 'Scorched earth policy' proved to be one of Stalin's best tactics. This was when the Russian people would set fire to and burn fields and other areas where the Nazis might have been able to get food. This meant that fighting became very difficult for the Germans because all the crops had been burned and starvation began to kick in. Guerrilla and sabotage groups were set up and finally, churches were also reopened and used to encourage people to fight in the war. ...read more.

Compared to the German army the Russians were ill equipped, their weapons were outdated, poor and low in number. The German leadership was far superior and the Nazis had had far better training. Stalin then became quite paranoid and felt he couldn't trust some of his leading generals. This situation lead to purges and 2 out 5 generals, as well as many other officers, were removed from their position. Despite all this the Russian army showed great determination, they were heroic, and they were patriotic and this was enough for them to come out on top. In conclusion, it is clear that overall the Soviet's reacted in a very positive way to the German invasion. The Russian victory was a result of many factors, most of all a leader who proved his and his supporters capabilities in winning the war. ...read more.