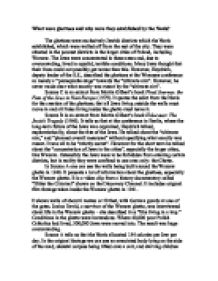 What were ghettoes and why were they established by the Nazis?

What were ghettoes and why were they established by the Nazis? The ghettoes were exclusively Jewish districts which the Nazis established, which were walled off from the rest of the city. They were situated in the poorest districts in the larger cities of Poland, including Warsaw. The Jews were concentrated in these areas and, due to overcrowding, lived in squalid, terrible conditions. Many Jews thought that their lives could not possibly get worse than this. However, Heydrich, deputy leader of the S.S., described the ghettoes at the Wannsee conference as merely a "prerequisite stage" towards the "ultimate aim". However, he never made clear what exactly was meant by the "ultimate aim". Source C is an extract from Martin Gilbert's book Final Journey: the Fate of the Jews in Nazi Europe (1979). It quotes the edict from the Nazis for the creation of the ghettoes; that all Jews living outside the walls must move in and all Poles living inside the ghetto must leave it. ...read more.

It is a video clip from a history documentary called "Hitler the Criminal" shown on the Discovery Channel. It includes original film footage taken inside the Warsaw ghetto in 1941. It shows walls of about 6 metres or 20 feet, with German guards at one of the gates. Janina David, a survivor of the Warsaw ghetto, was interviewed about life in the Warsaw ghetto - she described it as "like living in a trap." Conditions in the ghetto were horrendous. Where 40,000 poor Polish Catholics had lived, 500,000 Jews were moved into. The result was huge overcrowding. Source A tells us that the Nazis allocated 184 calories per Jew per day. In the original footage we can see an emaciated body lying on the side of the road, skeletal corpses being lifted onto a cart, and starving children standing on a footpath. ...read more.

The ghettoes were never intended to be the final Solution to the Jewish Problem. Heydrich told the conference held in Berlin that the ghettoes were only a "prerequisite stage" towards the "planned overall measures" - a euphemism for the permanent solution to the "Jewish Problem". Hitler himself said, "We can only do what is feasible," meaning that the ghettoes were "a stage" towards something much worse. Hitler did not say what his aim was, and he did not decided on the Final Solution until the second half of 1941. Ghettoes were established to bring the Jews under the Nazis' control in the short term. This was only a temporary solution until permanent one was decided in the long term. It was a necessary stage for the "ultimate aim" - to solve the "Jewish Problem" permanently. By having the Jews "concentrated" in a small number of places they would be available for any "solution" the Nazis should decide on. Ghettoes would facilitate the final solution. ...read more.