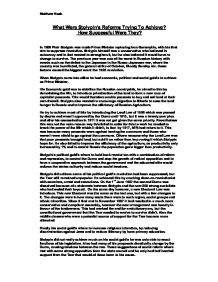 What Were Stolypin's Reforms Trying To Achieve? How Successful Were They?

What Were Stolypin's Reforms Trying To Achieve? How Successful Were They? In 1906 Pietr Stolypin was made Prime Minister replacing Ivan Goremykin, with his first aim to suppress revolution. Stolypin himself was a conservative who believed in autocracy and in fact wanted to strengthen it, but he also believed it would have to change to survive. The previous year was one of the worst in Russian history with events such as the defeat to the Japanese in the Russo-Japanese war, where the country was humiliated, the general strike of October, Bloody Sunday etc. these factors caused the biggest event the 1905 revolution. When Stolypin came into office he had economic, political and social gold's to achieve as Prime Minister. His Economic gold was to stabilise the Russian countryside, he aimed to this by demolishing the Mir, to introduce privatisation of the land to form a new race of capitalist peasants. ...read more.

He also failed to improve the efficiency of the agriculture, as productivity only increased by 1% and in central Russia the population grew bigger than productivity. Stolypin's political gold's where to hold back revolution with a combination of reform and repression, to control the Duma and stop the growth of radical opposition and to have a cooperative approach between the government and the educated elite would enforce the states authority and reduce social tensions. Stolypin did achieve some of his political gold's revolution had been suppressed, but the Tsar still remained unpopular. He achieved this by cracking down on revolutionist with searches, arrest and executions. On the 1st June 1907 the second Duma was dissolved because of a stalemate between Stolypin and the now 200 strong socialists who had ended their boycott. On the same day however, a new Electoral Law was introduce. This new Electoral was the same as the last one, but with a few changes to it. ...read more.

So, in conclusion Stolypin's reforms did not achieve the goal's he had set out for them, in fact they achieve very little. His assassination in 1911 did not help his reforms after he had passed, his reforms which where suppose to take twenty years to work where ended or not given as much effort. The Tsar did not help much either to help achieve he reform gold's as Nicholas gave him the lack of support that he need. Also it doesn't help much if your Tsar is more interested in the weather than the plight of his people. But Russia itself was the main reason why they failed; as he had so many problems to deal with before he could get started. Agriculture reform failed because of the backward thinking of the peasants and them being afraid of change, the land hunger, the population growing quicker than production, increase number of revolutionist causes a threat to the Tsar and himself, and finally the problems of the working class such as their conditions etc. Matthew Nash ...read more.