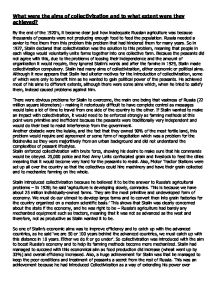 what were the aims of collevtivisation, and to what extent were they achieved?

What were the aims of collectivization and to what extent were they achieved? By the end of the 1920's, it became clear just how inadequate Russian agriculture was because thousands of peasants were not producing enough food to feed the population. Russia needed a savior to free them from this problem this problem that had hindered them for many years. So in 1927, Stalin declared that collectivization was the solution to this problem, meaning that people in each village would voluntarily unite farms together into one collective farm. Because the peasants did not agree with this, due to the problems of loosing their independence and the amount of organization it would require, they ignored Stalin's words and after the famine in 1929, Stalin made collectivization compulsory. Stalin had many aims of collectivization, either economic or political aims. Although it now appears that Stalin had ulterior motives for the introduction of collectivization, some of which were only to benefit him as he wanted to gain political power of the peasants. He achieved most of his aims to different extents, although there were some aims which, when he tried to satisfy them, instead caused problems against him. There were obvious problems for Stalin to overcome, the main one being that vastness of Russia (22 million square kilometers) ...read more.

Either we do it or go under'. So collectivization was introduced with the aim to boost Russia's economy and to help its farming methods become more mechanized. Stalin had managed to succeed with this economical aim as food production did increase (wheat went up by 33%) and overall efficiency increased. Also, a huge achievement for Stalin was that he managed to keep the poor conditions and treatment of peasants a secret from the rest of Russia. This was an achievement because he had introduced Collectivization as a way of extending his power over peasants, which he ultimately did achieve, due to his brutality and the fear which this had caused in the peasants. So Stalin did achieve this aim to a certain extent but in other ways, he did not. At first, collectivization was an economic disaster due to the amount the country needed to catch-up on, and the amount of time they had, meaning that the paces of change was simply just too fast. The government had tried to collectivize 60% of all farms in Russia between December 1929 and March 1930, causing chaos amongst the peasants because between 1929 and 1933, food production levels fell because the peasants would rather have killed their own livestock that hand it over to the kolkhoz. ...read more.

The only problem with this being that there was no grain surplus- in fact, there was a grain shortage. Stalin said that this was due to rich peasants farmers hoarding their grain as a way to encourage collectivization. This gave the poorer peasants an excuse to kill the richer peasants, as they undertook 'de-kulakisation' in an attempt to settle old scores, spurred on by Stalin's encouragement (and the OGPU anti-kulak forces he provided), eventually destroying the Kulak class as 6.5 million people died. Although Stalin had achieved this aim, he now faced a problem: by attacking the Kulaks, the government had effectively destroyed their most capable and effective farmers, and the ones who could have adapted to the change in technology and mechanization. Stalin wanted to merge small peasants into Solkhoz and Kolkhoz because he defined collectivization as 'the setting up of collective farms and the state farms in order to squeeze out all capitalist elements from the land'. The Kolkhoz peasants pooled their resources and shared their work profits. The kolkhoz farms were also useful because it meant that the farmers would have schools, hospitals and nurseries. And in the Solkhoz, the peasants worked directly for the state and were paid their own wage. Another success was that the farms could become more mechanized as there was more land so heavy machinery was more efficient, e.g.: tractors, and could be more frequently used. This meant that Stalin had managed to mechanize agriculture, despite the initial resistance. ...read more.