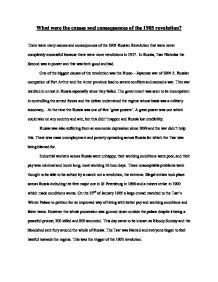 What were the causes and consequences of the 1905 revolution?

What were the causes and consequences of the 1905 revolution? There were many causes and consequences of the 1905 Russian Revolution that were never completely successful because there were more revolutions in 1917. In Russia, Tsar Nicholas the Second was in power and this was both good and bad. One of the biggest causes of the revolution was the Russo - Japanese war of 1904-5. Russian occupation of Port Arthur and the Amur province lead to severe conflicts and caused a war. This war resulted in unrest in Russia especially since they failed. The government was seen to be incompetent in controlling the armed forces and the defeat undermined the regime whose basis was a military autocracy.. At the time the Russia was one of five 'great powers'. A great power was one which could take on any country and win, but this didn't happen and Russia lost credibility. Russia was also suffering from an economic depression since 1899 and the war didn't help this. There was mass unemployment and poverty spreading across Russia for which the Tsar was being blamed for. ...read more.

However, the emancipation imposed harsh economic conditions on the peasants and did not satisfy their need for farmland. The poverty was causing major problems for the peasants and their employers and the country in general. The peasants were unrest and wanted their way of life to be improved drastically. There was all instability amongst students, business community and the intelligentsia who felt they were being ignored and they weren't being allowed much political influence. The revolution caused more people to strike and begin to realise that Russia needed change in order to be able to reform in an industrial, social and economic sense. In October of 1905 Nicholas published an October Manifesto promising basic rights like the freedom of speech and religion etc... Russia was currently paralysed by strikes and something needed to be done, with the help of Sergei Witte the manifesto was published. A key part of this was the proposal to form a Duma, a parliament, which could help govern Russia. This was supposed to have powers to stop laws being passed but Nicholas regularly over-ruled the Duma and still did his own thing using the Fundamental Laws. ...read more.

The peasants' main problem, their desperate need for land, was not dealt with and the police regime that had come into maturity in the 1880s did not change. Trade Unions had been made legal in principle, but the police frequently closed down individual unions. Political parties were legal and even revolutionary socialists could win seats in the Duma, but the members of revolutionary socialist parties were no less liable to arrest than before and their leaders were forced to emigrate to avoid imprisonment or exile within Russia. After order was eventually restored the autocracy and regime has lost a lot of support and were severely resented. The regime had executed 15,000 people, shot or wounded at least 20,000 and exiled 45,000. The problems in Russia were not solved by the 1905 revolution because the people had 2 more revolutions in February and October of 1917 and then there was a civil war in 1918 - 1920. Despite this the regime regained strength despite losing support and the autocracy survived and Nicholas remained as Tsar however this was the beginning of a downfall of the regime. The revolution had come, but the regime had fought back and survived. ...read more.