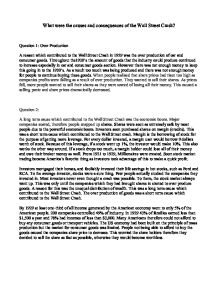 What were the causes and consequences of the Wall Street Crash?

What were the causes and consequences of the Wall Street Crash? Question 1: Over Production A reason which contributed to the Wall Street Crash in 1929 was the over production of car and consumer goods. Throughout the1920's the amount of goods that the industry could produce continued to increase especially in car and consumer goods section. However there was not enough money to keep this going in to the 1930's. As a result too much was being produced and there was not enough money for people to continue buying these goods. When people realised that share prices had risen too high as companies profits were falling as a result of over production. They wanted to sell their shares. As prices fell, more people wanted to sell their shares as they were scared of losing all their money. This caused a selling panic and share prices dramatically decreased. Question 2: A long term cause which contributed to the Wall Street Crash was the economic boom. Major companies soared, therefore people snapped up shares. Shares were seen as extremely safe by most people due to the powerful economic boom. ...read more.

This was a long term cause which contributed to the Wall Street Crash. The over production of goods was a short term cause which contributed to the Wall Street Crash. By 1929 at least one-third of all income generated by the American economy went to only 5% of the American people. 200 companies controlled 49% of industry. In 1929 43% of families earned less than $1,500 a year and 78% had incomes of less than $3,000. Many Americans therefore could not afford to buy any consumer goods or transport vehicles. The US economy had been built on the principle of mass production but the market for consumer goods was limited. People not being able to afford to buy the goods caused the companies share price to decrease. This worried the share holders therefore they decided to sell the share as fast as possible, otherwise they would become worthless. Question 3: On Tuesday 29th October 1929, the American Stock Market, Wall Street, crashed. As a result, 659 banks crashed in America in 1929, 1352 in 1930 and 2294 in 1931. ...read more.

It was a crisis in Germany. People had lost faith in the Weimar republic and many people wanted to see a change. It was realised that in such a crisis, the Weimar government needed one strong man to deal with Germany's problems. The Great Depression reignited people's anger for the Treaty of Versailles. People now started listening to Hitler. The Nazi's offered strength and discipline, which is what people were looking for. Before the Great Depression, people were happy to go along with Stresemann's policy. Support for Hitler grew as unemployment grew. In 1928, the Nazis had 12 seats in the Reichstag. In 1930 this rose to 107 and in 1932 to almost 200. The Nazi party was now the biggest party. In the 1932 presidency election, Hitler got 13 million votes to Hindenburg's 19 million. Von Papen and Hindenburg realised that a strong man who was backed with popularity in the Reichstag was needed in such a crisis, which is why they eventually appointed Hitler chancellor. Without the Great Depression, it is unlikely that Hitler would have risen into power. This unexpected event which Hitler had no control over was one of the most important reasons why he became chancellor. ...read more.