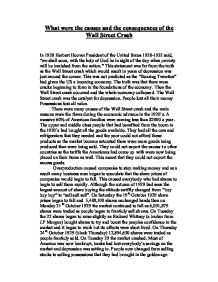 What were the causes and the consequences of the Wall Street Crash In 1928 Herbert Hoover President of the United States 1928-1932 said, "we shall soon, with the help of God be in sight of the day when poverty will be banished from the nation." This statement was far from the truth as the Wall Street crash which would result in years of depression was just around the corner. This was not predicted as the "Roaring Twenties" had given the US a booming economy. The truth was that there were cracks beginning to form in the foundations of the economy. Then the Wall Street crash occurred and the whole economy collapsed. The Wall Street crash was the catalyst for depression. People lost all their money Possessions lost all value. There were many causes of the Wall Street crash and the main reasons were the flaws during the economic advance in the 1920`s. A massive 60% of American families were earning less than $2000 a year. The upper and middle class people that had benefited from the boom in the 1920`s had bought all the goods available. They had all the cars and refrigerators that they needed and the poor could not afford these products so the market became saturated there were more goods being produced than were being sold. ...read more.

The only help they received was from private charities and some wealthy people. They provided soup kitchens and cheap food for them. The poor also set up help for each other they sold unmarketable fruit and exchanged it for services like medical help. Some unemployed men in Pennsylvania dug coal on companies property and sold it cheaply for money. The situation was not only bad in the city's it also affected rural areas of America as well. The wealth from the boom had not been divided equally and many people living in rural areas had been left poor. Now that people could not afford food and clothes farmers were unable to sell their produce. Crops were left in fields and not harvested as this was cheaper. It would cost more money to harvest and ship the produce than the money it would sell for. The farmer's income fell further and further and more become bankrupt every day. Many were evicted by the banks as they could no longer pay the rent or loans back. In 1932 Oscar Ameringer said when giving evidence to the House of Representatives that "thousands of bushels of wheat left in the fields uncut on the account of its low price that hardly paid for the harvesting". ...read more.

It wasn't due until 1945 but after the Wall Street Crash they had little money so they wanted their bonus early. About 25,000 bonus marchers set up camp in Washington and would not move until they got there bonus president Hoover refused to pay saying most of them were communists and criminals and over half of them had never been in the armed forces. They stayed there until the summer putting pressure on the government. Eventually Hoover called in the army to evict the marchers and their families from the area. They attacked them and set their tents on fire, two babies died from the tear gas used and many people including children were injured. This was the last straw for Hoover and actions the army made him very unpopular with the people of America. These mistakes resulted in Hoover getting voted out of office in 1932. He was replaced by Roosevelt who managed the situation much better than Hoover. The length and the effects of the depression could have been much better if Hoover had taken a role in the state of affairs much sooner and the effects would not have been too dreadful. It would have been better still if Hoover had worked on preventing the event as soon as the first signs occurred. ...read more.