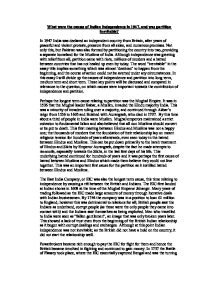 What were the causes of Indian Independencein 1947, and was partition inevitable?

What were the causes of Indian Independence in 1947, and was partition inevitable? In 1947 India was declared an independent country from Britain, after years of peaceful and violent protests, pressure from all sides, and numerous promises. Not only this, but Pakistan was also formed by partitioning the country into two, providing a separate homeland for the Muslims of India. Although independence was greeting with relief from all, partition came with riots, millions of murders and a hatred between countries that has not healed up even by today. The word "inevitable" in the essay title implies something which was almost 'destined' to happen from the beginning, and the course of action could not be averted under any circumstances. In this essay I will divide up the causes of independence and partition into long term, medium term and short term. ...read more.

This can be put down primarily to the harsh treatment of Hindus and Sikhs by Emperor Aurangzeb, despite the fact he made attempts to reconcile, especially towards the Sikhs, in the last few days of his life. This underlying hatred continued for hundreds of years and it was perhaps the first cause of hatred between Muslims and Hindus which made them believe they could not live together. This was an important first cause for the partition as it instilled hatred between Hindus and Muslims. The East India Company, or EIC was also the longest term cause, this time relating to independence by causing a rift between the British and Indians. The EIC first landed at Indian shores in 1608 at the time of the Mughal Emperor Jehangir. ...read more.

Powerbrokers became rich enough to pay the EIC for fight for them and hence the British became involved in fighting and continued to gain money. In 1757 the Battle of Plassey took place, where the EIC essentially captured Bengal and was the turning point in relations, as the British became hungry for physical power of their own. Although greatly exaggerated by British historians, this was no more than a number of Bengali elephants stampeding, handing the British victory. This began tensions between Indians and the British as they first used force to get what they wanted. At this time Hindus prophecied that the Vedas spoke of a rule lasting only 100 years, so in 1857 the Indian Mutiny took place as Hindus believed it was at this time the British would be overthrown. Unfortunately it failed, and this angered the Indians further as perhaps the British were "overstaying their rule" in India. ...read more.