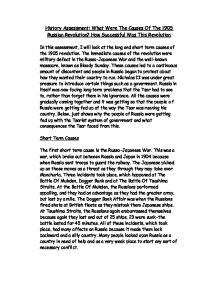 What Were The Causes Of The 1905 Russian Revolution? How Successful Was This Revolution?

History Assessment: What Were The Causes Of The 1905 Russian Revolution? How Successful Was This Revolution In this assessment, I will look at the long and short term causes of the 1905 revolution. The immediate causes of the revolution were military defeat in the Russo-Japanese War and the well-known massacre, known as Bloody Sunday. These causes led to a continuous amount of discontent and people in Russia began to protest about how they wanted their country to run. Nicholas II was under great pressure to introduce certain things such as a government. Russia in itself was now facing long term problems that the Tsar had to see to, rather than forget them in his ignorance. All the causes were gradually coming together and it was getting so that the people of Russia were getting fed up of the way the Tsar was running his country. Below, just shows why the people of Russia were getting fed up with the Tsarist system of government and what consequences the Tsar faced from this. Short Term Causes The first short term cause is the Russo-Japanese War. This was a war, which broke out between Russia and Japan in 1904 because when Russia sent troops to guard the railway. The Japanese picked up on these moves as a threat as they through they may take over Manchuria. ...read more.

The Tsar wasn't the right man for the job because he didn't want to be Tsar in the first place, he found the job boring, as he had to write reports and his own family came before his own country. The people of Russia felt they could come to the Tsar for anything and in an instant he would make it better. He was very popular in the Russian eye. Not many people liked the idea of the Government being an Autocracy, which means that the Government was ruled by one man who controlled everything and couldn't be elected out. Many people wanted a say in the way things were being run and felt they should be able to choose a certain ruler. Also, many people didn't like the Government being ruled like a dictatorship and would have been much happier with it being a democracy, so they could have been able to elect other people as rulers, be able to vote and have freedom of speech. Even though the Tsar took advice from his advisors (Aristocracy), they were only allowed to advise him and not tell him to do things. Many people were unhappy with the fact of the size of the country and lack of communication. Although Russia was a very vast country, it had many disadvantages to its industry and to its climate. ...read more.

One of these things, which he didn't like, was that only half the population was Russian. There where many different races in Russia, as Russia had conquered lots of states, and the Tsar decided that he wanted his country to be more together, so he encouraged all of the people to speak the Russian language and follow the Russian religion. This policy is known as Russification, and was very unpopular indeed. The people of Russia wanted to live their lives their way and felt they should have the right to follow what every religion or speak whatever language they wanted. From this we can conclude that the people of Russia wanted many changed made to the country that they lived in and wanted them fast. Many of them wanted it to be a fair country, give people a democracy and a chance to vote, better living conditions for everyone and really have a chance in life. The revolution had come about due to lots of long term causes and to short term causes. Many people expected changes quickly, as they trusted the Tsar and if they came in need to him he would give them what they wanted. In my opinion the revolution was a big failure because Nicholas didn't take the people seriously and although he didn't know it, they would have another revolution very soon. He promised lots of things to make the revolution stop and in return gave the people of Russia nothing. ...read more.