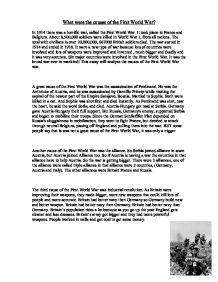 What were the causes of the First World War

What were the causes of the First World War? In 1914 there was a horrific war, called the First World War. It took place in France and Belgium. About 8,500,000 soldiers were killed in World War 1, from all nations. The total with civilians is over 20,000,000, 667000 British soldiers died. The war started in 1914 and ended in 1918. It were a new type of war because lots of countries were involved and lots of weapons were improved and invented , much bigger and deadly and it was very accurate. Six major countries were involved in the First World War. It was the brutal war ever in mankind! ...read more.

He was mad and he wanted a big empire like Britain and strong navy to scare other countries if they went to war. He wanted respect of Germany. As Britain build new, bigger and better weapons in the industrial revolution, he tried to copy Britain and build better ships as Britain build better, so they were in arms race between Great Britain and Germany. By 1914 Germany were producing more coal, iron steel and cars then Britain. Another cause of the Great War was France and Germany as Rivals. One of the states of Germany had taken some land from France in a war in 1871. France was deeply angry and wanted the land back. After the First World War women's could work more jobs in UK. Belgium badly damaged. After a new flu spread around Europe the Spanish flu killed at least 50 million people. ...read more.