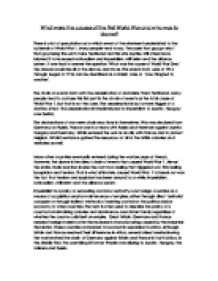 What were the causes of the First World War and who was to blame?

What were the causes of the First World War and who was to blame? There is a lot of speculation as to which event of the nineteen hundreds led to the outbreak of World War 1. Many people tend to say, "Because that guy got shot." That guy being The Arch Duke Ferdinand and his wife Sophie. Still others have blamed it to increased nationalism and imperialism, militarism and the alliance system. If one had to answer the question "What was the cause of World War One," the answer would be all of the above, and more. The events from June of 1914 through August of 1914 can be described as a classic case of 'one thing led to another'. The chain of events starts with the assassination of Archduke Franz Ferdinand. Many people tend to confuse this first part in the chain of events as the total cause of World War 1, but that is not the case. The assassination is but a mere trigger of a domino effect. The assassination immediately led to Imperialism of Austria-Hungary over Serbia. The declarations of war were chain reactions in themselves. War was declared from Germany on Russia. France was in a treaty with Russia and therefore against Austria-Hungary and Germany. ...read more.

Alliance at the outbreak of World War 1 consisted of Britain, France, and Russia against Germany, Austria-Hungary, Turkey and Bulgaria. The Triple Entente consisted of Britain, France, Russia, and the Dual alliance consisted of Germany and Austria-Hungary. The alliance system is a cause of World War 1 because it drew more countries into the war. If the alliances' were not formed then it would not have been a World War, but maybe a local war. Because each nation/country also greatly believed in nationalism, each wanted to join it. Nationalism is the devotion to the interests or culture of one's nation. The belief that nations will benefit from acting independently rather than collectively, emphasizing national rather than international goals and aspirations for national independence in a country under foreign domination. A nationalist is some who believes their country is the best, and this was a large cause to the war, because each country believed that it was best. Young men signed up to it because of the glory and their beliefs in nationalism. Nationalism was in each main country or nation: Germany, Italy, Austria-Hungary, Russia, France and Britain. Germany's ambitions were extended to many parts of the globe; Germany came into serious conflicts with all other major powers of Europe, except Austria-Hungary, from 1890 to 1914. ...read more.

France had been the dominant power in Europe for a long time. Her people were great nationalists as they had been dominant for a long time. She had good armies and was part of the Triple Entente, which gave her good back-up if someone did start a local war with her. In the late 18th century, Britain was the most industrially advanced country in Europe. She also possessed the largest overseas empire and the largest navy in the world. She did not want to trouble herself with the continental affairs of Europe. She had a small land army, which was called The British Expeditionary Force or Old Contemptibles, which although small, very powerful. No one country is responsible for World War 1. If one had to put the blame on something, it would be tension and nationalism. There was the main trigger cause, the assassination of The Arch Duke Ferdinand and his wife Sophie. The people of each country/nation wanted a war. Although everyone thought, it would be over by Christmas. There were cheering crowds in the street. This shows that although the main countries that caused the war are Russia and Serbia, Austria-Hungary and Germany because of their beliefs in nationalism. So overall, it is not a who that cause World War 1, it is a what. Therefore that what is nationalism. ...read more.