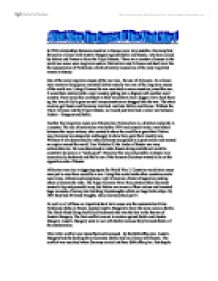 In 1914 relationships between countries in Europe were very unstable. Germany had formed an alliance with Austria-Hungary against Serbia and Russia, who been joined by Britain and France to form the Triple Entente. There are a number of causes in the world war some were long term such as Nationalism and Alliance and short term like the assassination of Ferdinand, which ultimately caused one of the most important events in history.

One of the main long term causes of the war was - the use of Alliances. An alliance were meant to bring peace and stability but actually was one of the long term causes of the world war. Using alliances the war escalated as more countries joined the war, it would have started with a small country getting into a dispute with another small country. They would feel confident as they would have had a bigger ally to back them up, the lone of ally’s goes on until many countries are dragged into the war. The chain reaction got Russia and Germany involved, and later Britain and France. Without the Triple Alliance and the Triple Entente, we would just have had a minor war between Austria - Hungary and Serbia.

Another key long term cause was Nationalism. Nationalism is a devotion and pride in a country. The rise of nationalism was before 1914 and caused rivalry, even hatred between the major nations, who wanted to show the world how great their Nation was. Germany was desperate and hungry to show how great their country was. Willhem II was determined to make Germany recognised as a great nation and wanted an empire around the world. Tsar Nicholas II, the leader of Russia was very nationalistic too. He was determined to make Russia strong and did not want his country to be seen as a “week giant”. However this was not possible as Russia was economically backward and that’s one of the Reasons Germany wanted to be on the opposition side of Russia.

Militarism was also a triggering aspect for World War 1. Countries would train many men just in case there would be a war. Using this would make other countries create more arms, vehicles and aeroplanes. Until it became a factor of suspicion making others eliminate the risks. The Anglo-German Naval Race started when Germany wanted a big and powerful navy, but Britain was aware of their actions and invested huge amounts of money into building Dreadnoughts which are huge battle ships. By 1914 they had 29 Dread Noughts, while Germany had just 17.

This initial conflict was intensified and increased - by the Schlieffen plan. Austria-Hungary had the backing from Germany. Serbia had an alliance with Russia. The conflict was escalated when Germany carried out there Schlieffen plan. But despite the fact that Germany were in conflict with Russia, they first attacked Russia’s allies. They invaded France. The Schlieffen plan was designed so Germany would not have to fight on 2 fronts and split up their troops. They went through Belgium because of the land but that could only lead to trouble.

The final short term cause was when Germany invaded Belgium because Belgium had an old treaty with Britain, The Treaty of London since 1839 and that was when Britain  had promised to get involved in any problems Belgium had. Germany were foolish thinking Britain would not go with this ancient treaty but were very wrong. Germany had crossed Belgium in order to save distance and make it less tiring for 2 and a half million troops to cross the alps to get to France. G.B had wanted (were thinking) of join the war anyway because they were afraid Germany were becoming too powerful. When Germany were travailing through Belgium to invade France, Britain Demanded that they left. But Germany stayed in Belgium, and Britain declared war. Before, it had been little more than a conflict between Serbia and Austria-Hungary, now it was the First World War.