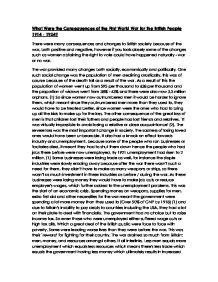 What Were the Consequences of the First World War for the British People 1914 - 1924?

What Were the Consequences of the First World War for the British People 1914 - 1924? There were many consequences and changes to British society because of the war, both positive and negative, however if you look closely some of the changes such as women obtaining the right to vote could have happened naturally - war or no war. The war provided many changes both socially, economically and politically. One such social change was the population of men declining drastically, this was of course because of the death toll as a result of the war. As a result of this the population of women went up from 595 per thousand to 638 per thousand and the proportion of widows went from 38% - 43% and there were also now 3.5 million orphans. (1) So since women now outnumbered men it would be harder to ignore them, which meant since they outnumbered men more than they used to, they would have to be treated better, since women were the ones who had to bring up all the kids to make up for the loss. The other consequence of the great loss of men is that children lost their fathers and people had lost friends and relatives. `It was virtually impossible to avoid losing a relative or close acquaintance' (2). ...read more.

this was because the war effort changed male attitudes towards women and also because women showed they were independent and could strive in society. Although there was a great deal of poverty and depression after world war one, the government did a great deal to try and make living standards bearable again - particularly in working class areas. Because all of the bombing, obviously a lot people had lost their homes, there were more houses blown up then they had time to build new ones, so the `homes fit for heroes' campaign was set up, which was basically a scheme to quickly build new housing, for instance new tower blocks for those who fought in the war mainly, but also others who had their houses destroyed. Many state benefits were extended during and after the war, which helped to deal with the poverty and helped to put people's minds off the massive unemployment figures. This tied in with the fact that orphans and widows were able to collect extra money to compensate for their fathers/husbands not being there anymore. Also before the war school dinners were not compulsory, but this soon changed as the government figured that if they provided free meals then it would solve under nourishment and health problems, which were prevalent in armies across Britain. ...read more.

this, if there had been no war and people had been paying attention to political goings on, there would be a big chance one of the party's would slip up and a new one would be voted for - natural progression. Finally the fact that society is always evolving. Even if the war did provide some definite big consequences, a lot would have changed anyway. If the war had never had happened for example there is a possibility that there wouldn't have been mass unemployment. Today there hasn't been a war for over fifty years and look how much has changed. Maybe the change would have been less extreme, but it would have still happened. In conclusion, Britain definitely wouldn't have changed as much if the war hadn't of happened women wouldn't have had the job opportunities, there wouldn't have been such a dent in the population and the political system may not have changed so drastically. It is hard to tell though because society does evolve naturally and factors such as suffragette violence to win women the vote and the fact that modern had already been invented. But anything that could have possibly changed if there was no war was confirmed change by the war. In other words war definitely did change some things that were only maybe going to change anyway. It was more the war that changed society than natural progression. ...read more.

the main strength of the essay is the depth of the knowledge and detail about the period. It would have been better if the planning had been more ruthless. The paragraphs needed to have strong and clear key points and in places the essay drifts around and is not sharply focussed. For the higher levels sharp focus on the issue in the question and carefully selected supporting detail is essential.

This is a good essay with some factual evidence and a good conclusion, but would benefit from a stronger understanding of factual evidence and a better quality of writing. The student clearly understands the need to consider several consequences of the First World War, so they are right to consider more than one. The student takes this a step further by considering whether the upheaval Britain experienced in this period was "natural progression" or a direct consequence of the war, and by considering this they are showing they have additional knowledge and understanding, as this is not mentioned in the question but is still relevant. This particular idea is explored well by the student, and it is clearly something they understand. Quoting Asquith in the fifth paragraph shows that the student can blend their own response to the question with those of others, and also shows they have read around the subject. The student could improve on their introduction by summarising the arguments they are about to make - at present they refer to one consequence of the First World War (women's suffrage) but it would show they could organise their ideas if they referred very briefly to each consequence they are about to mention, something that would only take a couple of extra sentences in total.

In terms of factual evidence, the student makes excellent use of statistics, such as "Over 50% of GNP by 1918", which is good as it shows that the student recognises that this is a high percentage. This is better than saying "It was a high proportion of GNP by 1918", because that doesn't prove that the student understands how much a "high proportion" actually is. However, the reference to modern-day politics in the third paragraph from the end is unnecessary because it is way out of the timescale (1914 - 1924), which suggests to the examiner that the student is off task. While the point the student is making is good - a change in the party in power is perhaps inevitable, rather than a consequence of anything - they could appear to be more on task by referring to other changes in party power nearer to the period, such as 1906 when the Liberal Party defeated the Conservatives.

The student makes some good judgements, such as "So you could say the suffragists and suffragettes won the right to vote single-handedly", because they have responded to evidence while using the word "could" to show that they realise nothing is certain in history and there are several interpretations on why women got the vote. However, other judgements are inaccurate, such as "the government was in a state of chaos during the war anyway". This isn't supported by any factual evidence, and it is inaccurate because the second wartime government was highly organised - for example, it created an organisation called the Cabinet Secretariat to record and organise the business of Cabinet government. It is vital to always back up what you are arguing with evidence, or else your judgements can become inaccurate. However, the conclusion is very good, because it summarises the arguments made in the essay (which shows the student can organise their ideas) and answers the original question, which shows they can look back over their work and assess it to find an answer.

The spelling, grammar and punctuation is generally good, meaning there is no confusion over what the student means, although there are some minor errors in the essay that make it less logical: for example, "The war provided many changes both socially, economically and politically" doesn't quite make sense because the word "both" refers to two things, not more than two. Although this wouldn't lose the student marks, it makes their work appear rushed and as though it hasn't been proofread. The student also says some things that seem out of place and informal in an academic essay on a serious topic, such as "Basically it changes a lot, which party is in power", which sounds more like something that would be said in a conversation rather than written down. To improve both of these errors, it would be better to check your work and make sure it has a logical and suitable tone. It is also important to refer correctly to the Conservative Party as "the Conservatives" or "the Conservative Party" rather than "Labour got into power in 1997 replacing conservative." as this student does, as it shows correct and accurate knowledge.