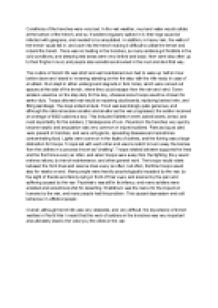 What were the key details of trench life?

Transfer-Encoding: chunked ﻿Conditions of the trenches were very bad. In the wet weather, mud and water would collate at the bottom of the trench, and so, if soldiers regularly walked in it, their legs would be infected with gangrene, and needed to be amputated. In addition, in heavy rain, the walls of the trench would fall in, and cave into the trench making it difficult to utilise the trench and rebuild the trench. There was no heating in the trenches, so many soldiers got frostbite in the cold conditions, and sleeping rest areas were very limited and basic. Men were also often up to their thighs in mud, and people also sometimes drowned in the mud and died that way. ...read more.

Some soldiers would be on fire step duty for the day, whereas some troops would be chosen for sentry duty. Troops allowed rest would be repairing duckboards, replacing barbed wire, and filling sandbags. The days ended at dusk. Food was surprisingly quite generous, and although the rations became smaller and smaller as the war progressed, the soldier received an average of 4000 calories a day. This included Salterton meet, baked beans, bread, and most importantly for the soldiers, 2 tablespoons of rum. Wounds in the trenches very quickly became septic and amputation was very common in injured soldiers. ?Rats as big as cats? were present in tranches, and were unhygienic, spreading diseases and sometimes contaminating food. ...read more.

Many people were heavily psychologically impacted by the war, by the sight of friends and family dying in front of their eyes, and scarred by the pain and suffering caused by the war. Psychiatry was still in its infancy, and many soldiers were arrested and sometimes shot for deserting. Shellshock was the name for the impact on humans by the war, and many people had this problem. This caused depression and odd behaviour in affected people. Overall, although trench life was very desirable, and very difficult, the importance of trench warfare in World War I meant that the work of soldiers in the trenches was very important and ultimately lead to the victory by the Allies in the war. ...read more.