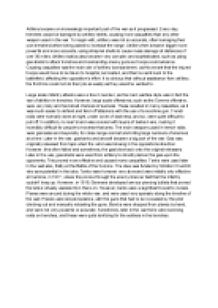 What were the key feature of trench-based offensives?

Transfer-Encoding: chunked ﻿Artillery became an increasingly important part of the war as it progressed. Every day, trenches would be barraged by artillery shells, causing more casualties than any other weapon used in the war. To begin with, artillery was not so accurate, often barraging their own trenches before being asked to increase the range. Artillery then became bigger more powerful and more accurate, using shrapnel shells to cause mass damage at distances of over 30 miles. Artillery tactics also became very complex and sophisticated, such as using gas shells to attack trenches and bombarding enemy guns so troops could advance. ...read more.

However, large scale offensives, such as the Somme offensive, were very risky and had small chances of success. These resulted in many casualties, as it was much easier to defend and fend off attackers with the use of a machine gun. Trench raids were normally done at night, under cover of darkness, and so, were quite difficult to pull off. In addition, no man's land was covered with layers of barbed wire, making it incredibly difficult for people to traverse that area. The main weapons used in trench raids were grenades and bayonets, for close range combat and killing large numbers of enemies at a time. Later in the war, gas tanks and aircraft became a big part of the war. ...read more.

Tanks were however very slow and were initially only effective at Cambrai, in 1917, where they broke through the enemy lines so fast that the infantry couldn't keep up. However, in 1918, Germans developed armour piercing bullets that proved the tanks virtually useless from there on. However, tanks were a significant boost to morale. Planes were around during the whole war, and were used very sparsely along the timeline of the wall. Planes were simple biplanes, with the guns that had to be re-loaded by the pilot climbing out and manually reloading the guns. Bombs were dropped from planes by hand, and were not very powerful or accurate. Sometimes, later in the war there were bombing raids on trenches, and these were quite terrifying for the soldiers in the trenches. ...read more.